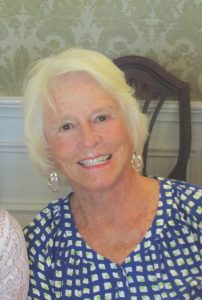 Virginia (Gina) Riddiford (nee Rankin), most recently of Boca Grande, passed away peacefully on October 23, 2020 of complications from Alzheimer’s Disease.

In addition to being a loving wife, mother and Grandmother to her 5 grandchildren, she was strong, energetic, creative and fun-loving. Because of her gregarious nature and great sense of humor, she always made new friends easily. Not one to mince words, underneath, she had a soft, kind heart. She was also a determined advocate of women’s rights.

The daughter of James L. Rankin and Louise Miller Rankin, Gina was born in Milwaukee, Wisconsin on January 6, 1937.  Gina grew up in Minneapolis, Minnesota, with her younger brother, James L. (Jimmy) Rankin, Jr.  During high school, she met her husband, David, whom she married on August 16, 1958.

Gina graduated from Edina High School in Minneapolis, attended Wells College in Aurora, New York, and earned her bachelor’s degree from the University of Minnesota.

After graduating, she became a Fourth Grade teacher at the Edina Schools and the Blake School in Minneapolis. She loved teaching, and carried that passion throughout her life.

In 1970, her family moved to Andover, Massachusetts, where she became a successful real estate agent. While living in Andover, she was an active volunteer in several organizations, including the Andover Conservation Commission, the School building committee, and as a Girl Scout leader.

She was a 28-year seasonal resident of Boca Grande, Florida, and a 40+ year summer resident of South Bristol, Maine.

While in Maine, she and her husband David loved and cared for their 200-year-old farm house, and surrounding grounds at Poor House Cove, including her great love – an extensive perennial garden, which was distinguished by 20+ peony plants. In addition, she enjoyed swimming, tennis and boating, and was a member of the Christmas Cove Improvement Association where she served as chairman of the entertainment and buildings & grounds committees.

In Boca Grande, she became a successful artist, often exhibiting her paintings at the Art Center. She also volunteered at the Boca Grande Lighthouse Museum, which she enjoyed immensely.

Her brother Jimmy remembers his big sister as always having his back, especially when pushing him around. They lost their mother when Gina was 12, and Jimmy was seven. It was hard for both to be without a mother figure, but especially so for a teenage girl. “Went way too soon. Via con Dios and rest in peace – until we meet again, big sis.”

A celebration of Gina’s life will be planned for a later date.