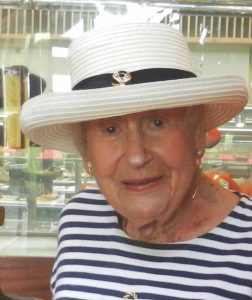 Virginia “Jinny” Estelle Garrett Cunning, 100 years of age, passed away on Friday, December 15, 2017 at Elizabeth House, a hospice facility in Flat Rock, N.C. Jinny was born in 1917 in Brooklyn, New York, the daughter of the late Lewis and Rebecca Kimmelman Garrett.

After graduating from Bryant Business College in Providence, Rhode Island, she was employed as a secretary by the A & P Tea Company in Newark, N.J., where she met her future husband, Palmer “Pat” Cunning.

She liked to tell everyone that she married her boss. Jinny and Pat enjoyed traveling to many places in the U.S. and Canada where she could play golf and he could follow his desire to catch “the big one.”

After Pat’s retirement in 1965, they spent the warm months in Lake Toxaway, North Carolina, and the winters in Boca Grande.

She always walked the links, retiring in her eighties when she could no longer pull her cart up the hills.

Jinny was predeceased by her parents and husband; brother Murray Garrett; and stepdaughter Patricia Cunning Gilbert and her husband, Edward. She is survived by her daughter Kathy and her husband, Rees, of Emory, Virginia; grandson Daniel and his wife, Jen, of Burlington, Vermont; her sister-in-law, Shirley Garrett, of Emerald Isle, N.C.; and two nephews.

In lieu of flowers, the family would appreciate donations to one of Jinny’s favorite organizations, Transylvania Habitat for Humanity, 690 Ecusta Road, Brevard, N.C. 28712.