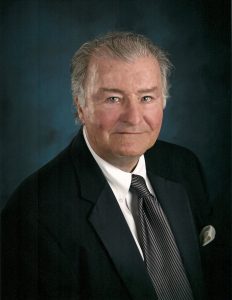 Bob was born in Brooklyn, New York, in 1931 – a first-generation American of German/Swiss parents, his passion for music led him to a life that became an extraordinary adventure. He not only presented some of the world’s greatest dancers on stage as Indianapolis City Ballet’s Founding Chairman and as Executive Director for the Joffrey, he also danced with Ginger Rodgers at Chautauqua Institution, took Audrey Hepburn on a fact-finding mission in Ethiopia and produced a national tour for UNICEF with her, met with Statesmen, Royalty and Rock Stars to raise funds and awareness for national and international causes.

When Bob came to Indianapolis, native home of Jane Fortune, his life partner of the last 26 years, he found a community with a welcoming embrace that he relished. Though retired after an extensive career in philanthropy, culture and education, together they embarked on their latest series of adventures from creating the Indianapolis City Ballet with Bob’s son Kevin, to starting a fine Tuscan restaurant Bella Fortune and a winery of the same name in Northern Michigan. Their other collaborations of which Bob was most proud was the founding by Jane of the Advancing Women Artists Foundation, that supports the recognition and restoration of artworks languishing in Florentine museums by women artists.

It was music that set his course as a young man. His violin earned him a scholarship to the State University of New York at Fredonia where he received his degree. Drafted into the Army, he managed the prestigious Seventh Army Symphony in Stuttgart, Germany and toured the European Capitals as an ambassador for the United States and the U.S. Military.

He served a stint teaching music in the public schools on Long Island, NY before joining his alma mater SUNY-Fredonia in the administration. He served as Executive Assistant to the President during the late-1960’s and early-70’s student protests and stitched together a durable relationship between the students, faculty and administration while also creating the first Public University Alumni program and expanding it across the New York State system. A few years later, he was tapped to revive a struggling liberal arts college as its President, Medaille College in Buffalo where he upgraded facilities, enhanced faculty credentials and tripled enrollment in three years, turning the college around from the brink. Today it is an international College with programs in Europe and Asia.

Returning to his love of the arts and his entrepreneurial management, he joined Chautauqua Institution in upstate New York as President for six years. Repairing a crumbling infrastructure, enhancing an arts and education program to bring the renowned entertainers, teachers and religious leaders, while balancing the budget – his efforts were featured in Forbes Magazine – He quickly earned a national reputation as “The Turnaround Expert’. While there he enjoyed presenting more than 300 performances during every 9-week summer season which is where, in a lecture he hosted in the 5,000-seat amphitheater with film luminary Ginger Rodgers, when she hadn’t prepared the 45-minute speech she was contracted for, and opened the floor for a questions and answer session that offered only ‘yes’ and ‘no’ responses from her, Bob turned and asked her what they should do, “Let’s dance” she said – and so they did to thunderous applause.

As Executive Director of the world-renowned Joffrey Ballet, still in New York City in the early 1980’s, he helped turn around the Company’s finances while licensing the full-length Romeo and Juliet by John Cranko (the first American ballet company to present a full-length Crank work) and presenting the Company at The Music Center in Los Angeles, at the Kennedy Center in Washington and at the Metropolitan Opera House in New York City.

When he became the chief fund-raiser for UNICEF, he was able to triple fund raising in his three-year tenure saving an additional 31,000 children each day around the world. Gains in recognition led to a phone call one day that Bob answered – “it’s Audrey Hepburn on the line” his secretary announced. It was a friendship Bob treasured, taking her to tour refugee camps in Ethiopia and creating the Anne Frank tour that Audrey narrated to a commissioned orchestral work from Michael Tilson Thomas and the New World Symphony. When Bob visited her at her home outside Geneva to develop the Anne Frank idea, she insisted he stay at her home. When they returned from dinner, she told him they’d have an informal breakfast in the morning, “no dressing up, just come downstairs and I’ll make you breakfast,” she said. He showered, shaved and put on his suit (no tie) and went downstairs – there was Audrey Hepburn in a robe and slippers in her kitchen making breakfast “what can I make for you for breakfast?”, she asked. “It makes no difference,” he replied “…nobody will ever believe it when I tell them”.

Always a mentor for young and intelligent professionals, he guided and launched The Change for Good program at UNICEF. Borne of the realization by an economist of the quantity of foreign coins on every international flight that would disappear into jars, drawers and the garbage when people could not exchange them at currency exchanges and banks at home, the program sought creative ideas to not just collect yen, yuan, lira and franc coins in the U.S. but to convert them to usable currency for charitable projects. The hurdles were high as customs regulations, logistics and ennui need to be addressed but, in his can-do attitude, he convened a group of interns and lead them through a process to challenge impediments and determine solutions to unleash a torrent of freely available funds. They unveiled a program with Phil Collins and Julio Iglesias as spokespersons that brought almost $1,000 per plane per day on Virgin Atlantic routes – it also engaged the flight attendants whose willingness to volunteer for such projects made them an invaluable resource to the organization. The program continues in various forms at airports and on airlines around the world.

Starting his own consulting firm allowed him to share his time-tested, entrepreneurial approach to not-for-profit management and to choose projects that further inspired him. Health, education and artistic organizations utilized his unique brand of ingenuity, discipline, optimism and enthusiasm to propel their missions forward so, when he and Jane arrived in Indianapolis after the close of its ballet company, he was sought-after to create a new company. Together they sought a strategic and smart way to introduce a new company without drowning the community in bad ballet or unsupportable programs – at the same time, they were always aiming for the best quality possible.

Bob has been the front man, the driving force behind the creation of Indianapolis City Ballet, with Jane and Kevin, and joined by Artistic Director Jolinda Menendez. His vision of creating and structuring a ballet company, adapting its development to market forces, was in-keeping with his earlier revolutionary philosophies. The result is a powerful impact on the ballet-connected communities of Central Indiana and beyond.

A connection to family, his partner Jane Fortune, her children Jennifer Medveckis (Jim Marzo) and John Medveckis with whom his life is so vitally connected, reveals a core of exploration, a commitment to principals and an enduring passion for people. To his children, Kevin and his daughters Deirdre (James Carpenter), Alison and Lisa, he has helped open a life of fascinating personalities and experience in the arts, commerce and culture, but mostly of possibility. And to his grandchildren (Olivia, Sara and Sophie), he offers a promise of fulfillment through diligence and belief – a belief that nothing is ever impossible.

Bob’s lifetime was filled with prestigious recognitions, most recently and importantly the Indiana Historical Society’s Living Legends Award that he shares with Jane. In 2015 he received the Chautauqua Institution’s highest award, the President’s Award. He is the only former President of the Institution to be granted it and only the sixth person in the institution’s 142-year history – the only previous recipients have been Sandra Day O’Connor, David McCullough, E.O. Wilson, Roger Rosenblatt, and Rita Moreno. He accepted the award in front of a crowd of more than 5,000 in the historic amphitheater.

The Hesse and Fortune Families respectfully request that, in lieu of flowers, charitable contributions be made to Indianapolis City Ballet (PO Box 40567, Indianapolis, IN 46240).

A private burial has been conducted and Bob has been laid to rest at Crown Hill Cemetery in Indianapolis. A public memorial service will be announced in 2017.