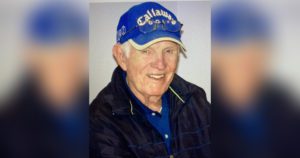 Robert (Bob) Hudson of Orlando was reunited with his Creator, Lord and Savior on January 2, 2021, two weeks shy of his 89th birthday on January 19, 1943. Bob was the middle of three sons born to Rev. Col. John and Helen Hudson in Tampa.

Affectionately known as “Red” in high school, Bob experienced his first three years of high school in Germany just after WWII while his dad was serving as a chaplain with the US Army. He finished high school at Sarasota High School, graduating in 1950. An excellent athlete, Bob, lettered in two sports –  football and baseball.

After transferring from Clemson, Bob attended Florida State and focusing on baseball. He graduated in 1955 after a successful baseball career and with a degree in Business Administration, eventually signing a professional baseball contract with the Cleveland Indians organization.

The dream of the big leagues was cut short by injuries, and Bob began his business career in the insurance industry. He soon switched to transportation, working for Ryder Truck Rental, Inc. in Miami.

Bob’s independent nature and knack for leadership led him to strike out on his own in 1966, by starting Servitor, Inc. Initially focused on automobile and medical equipment leasing. It soon, began competing in the truck rental and leasing industry.

Over the course of its 20-year history, Servitor operated locations in Miami, Ft. Lauderdale and Tampa.

Robert met his beloved wife, Ruth Ann (Whittle), at FSU and they married in 1957. They resided briefly in Miami and then Plantation,  where they raised their three children, Lee, Sharon and Doug.

Affectionately known by his grandchildren and many others as “Coach,” he coached or helped coach most every sports team his children participated in.

Robert is the brother of John Hudson. John, along with his wife Kathleen, moved to Boca Grande in 1974 and purchased the grocery store now known as Hudson’s. Grocery.

His memory will be cherished by his wife of almost 64 years; by his sons, Lee (Carolyn), Doug (Carrie) and daughter, Sharon Dodd; 11 grandchildren and two great-grandchildren.

In lieu of flowers, contributions to Russell Home for Atypical Children or First Orlando Foundation, would be appreciated.