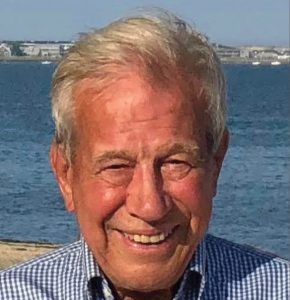 Richard Sebastian Cuda of Boca Grande and East Orleans, Mass. died peacefully at home surrounded by his family on Thursday, October 10, 2019, two months shy of his 87th birthday. Known to friends as Dick and to family as Pops, he was a loving husband, father, and grandfather, talented entrepreneur and philanthropist, and enthusiastic fisherman, hunter, and art collector. As he passed at first light, just as his beloved wife Ellie had ten years earlier, a Cape Nor’easter howled and the surf roared, nature’s ovation for a life well-lived.

Born on December 6, 1932, Dick and his older sister Dorothy, children of Carl and Frances Cuda, grew up in Pittsburgh, Pa. Dick graduated from Shadyside Academy in 1950, where he excelled in wrestling and developed a lifelong love of the outdoors as a member of the fishing club. He graduated from the University of Pittsburgh in 1954 with a BA in Finance, then joined the Army before entering Harvard Business School, graduating in 1957 with an MBA in Marketing. He then joined General Electric’s Marketing Training Program, working first in Evanston IL before transferring to West Hartford CT. He specialized in selling electrical distribution equipment to the construction industry.

In 1967 he bought Blake Equipment, a family company which sold and serviced industrial boilers, and expanded into water systems and pumps. He later acquired another business, Yankee Equipment, which he eventually sold to United Rentals. In his later years, he and Ellie revived Babcock Plantation, a family tree farm and wildlife habitat in Georgia. Dick also became Chairman of Babcock Lumber Company as well as Babcock Florida, which consisted mainly of cattle ranching and leased farmland. In 2006, he oversaw the sale of the property, which became an environmental preserve and America’s first solar-powered town. A businessman to the end, he co-owned S&C Cattle, a cattle ranch in Florida where he enjoyed spending time with cattlemen and riding his horse Doc.

While pursuing his graduate degree, he met the love of his life, Ellen (Ellie) Babcock, also from Pittsburgh, and they were married on June 28, 1957. Their children, Corinne, Fred, and Beth, were born in Evanston and the family later settled in West Hartford, Conn. In 1969, after several memorable Cape Cod summer vacations on Pilgrim Lake, Dick and Ellie made a home in East Orleans. The house, Lucky Stone, named for the striped rocks found on the beach, has provided three generations of joy to Dick and Ellie’s family and remains the deepest root of the Cuda family tree. In their later years, he and Ellie also resided in Boca Grande, a place near and dear to Ellie’s family.

Dick and Ellie were active with the Asylum Hill Congregational Church in Hartford and the Boca Grande Lighthouse United Methodist Church. Dick was a board member of the Cape Cod Museum of Art, Kingswood-Oxford School, the Barrier Island Park Society, and the Hartford Golf Club, and also belonged to Eastward Ho! Country Club, Gasparilla Golf Club, and Lemon Bay Golf Club. He enjoyed charitable work throughout his life, culminating in his and Ellie’s founding of the Cuda Women’s Health Center, part of the Cape Cod Healthcare system. In 2018, Dick and Ellie were honored with the Outstanding Philanthropist Award from Philanthropy Partners of the Cape & Islands.

In addition to hunting and fishing, Dick enjoyed golf, skiing, sailing, paddle tennis, rooting for the Steelers, clamming, and cooking. He passed down the family recipe for spaghetti marinara, a Sunday family tradition that continues to this day, and concocted the best linguine with clam sauce imaginable (hint: use marjoram instead of oregano). Above all, Dick was passionate about art, collected the works of several painters, and co-published a book on A. L. Ripley, a sporting artist.

Dick cherished time in Georgia with friends and family, hunting quail, duck, turkey, and deer, improving the land, and enjoying time in the beautiful woods. Dick raised many dogs there, mostly for hunting, and loved to bring his German Wirehairs, Oscar, Beaufuss, and Barclay as often as possible. His most recent loyal companion, Scout, an English Cocker, was a very bright light in his last years.

A celebration of Dick’s life will be held on his birthday, Friday December 6, at 1 p.m. at the Federated Church of Orleans, with a reception to follow at Eastward Ho! Country Club. Another service will be held in Boca Grande early next year.