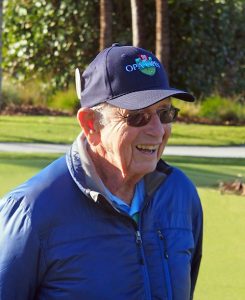 A graduate of Cornell University and Harvard Business School, Dick joined the family agricultural media company, American Fruit Grower Publishing Co. He successfully expanded the company with his brother Ed to a global media and information company, now branded Meister Media Worldwide. A gifted editor, Dick could capture the imagination and motivate others with a well-told story. He was also a frequent world traveler with Brick at his side, to agricultural markets around the globe, meeting with Presidents, Prime Ministers and world dignitaries.

A family tradition was for Dick to take each daughter on an international trip to gain exposure to world affairs.  Dick was a frequent speaker and advocate for agriculture at conferences and events across the country. His support for the next generation of agricultural leaders was recognized with the establishment of the Richard T. Meister Scholarship Fund endowed at the American Floral Endowment, for students studying horticulture and floriculture.

Dick was active in the Waite Hill community as Councilman and Zoning Board Chair and was a long-time member of the Kirtland Country Club, and the Gasparilla Golf Club.  He was a World War II veteran, arriving in France a month after D-Day.

In retirement Dick and Brick adopted Boca Grande, Fla as their winter home becoming active members in the community.  Dick continued his competitive golf career with the US Seniors Golf Association well into his 90’s. He remained a passionate advocate and student of the sport throughout his lifetime, studying new grips and swings, as well as being a willing coach for family and friends. He believed that golf teaches us some of life’s most valuable lessons; humility, honesty, patience, respect, focus, determination, and acceptance.

One of his greatest joys in golf was introducing his grandchildren and great-grandchildren to the game.  Dick would keep it simple, encouraging them to “just clip the grass”.  He took more pride when his grandchildren grew and could outdrive him than they did.  His philosophy in golf, as in life, was to leave it better than he found it.

In his honor for his many milestone birthdays, our families enjoyed a putting tournament called the “Opa Open”, a time to celebrate our “Opa” and his love for the game.   He loved being with his family, celebrating their accomplishments, always ready with a listening ear, an encouraging word, and a positive outlook on life.

Newer PostWhat’s that in the sky? Why, it’s a Jungle Penetrator!
Older PostPROFILE: David Sparks