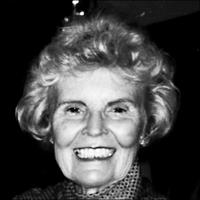 She was a member of the Colonial Dames of America and a direct descendant of pilgrims Miles Standish and Priscilla Alden as well as Jonathan Trumbull, the first governor of Connecticut.

She was born in New York City and was the daughter of Alan T. Trumbull and Helen Trumbull of Englewood, N.J., where she attended Dwight Morrow High School. She attended Western College for Women, now part of Miami University in Oxford, Ohio. She married William W Wilcox V in Englewood, N.J. in 1948 and moved to West Hartford, Conn., where she brought up three children – Ellen, Priscilla, and Wil. Priscilla served on many community boards and was president of the Hartford Hospital Junior Auxiliary and vice president of the Junior League of Hartford.

She was passionate about gardening and was a member and past president of the Garden Club of Hartford. Priscilla moved to Boca Grande, where she and Bill had spent many vacations. Here she continued her love of gardening as a member of the Boca Grande Garden Club and Planters of Boca Grande. She also served on the Board of Directors of the Boca Grande Historical Society and was a member of the Women’s Club. Priscilla was an avid fisher- woman and won third prize in the 1966 Field and Stream Tarpon Fishing Tournament by catching a 175-pound tarpon. She was also featured in a 1999 article on tarpon fishing in the Tarpon Times of the Boca Beacon regaling both Bill’s and her love of tarpon fishing.

She was predeceased by her sister Mary Van Buren and brother Bill Trumbull, her brothers-in-law Michael Wilcox and Stephen Wilcox and her sister-in-law Jane Wilcox. She is survived by her husband Bill of 71 years; her sister Anne Chapin; her children Ellen Wilcox, Priscilla Wilcox, and Wil Wilcox; her grandchildren Tara, James, Lindsay, and Whitney; and her great-grandchildren Ellie, James, Cian and Ronan.

The family wishes to express their sincere appreciation of the loving care and companionship offered to Priscilla over the past 3.5 years by Resty Nabukeera.

A reception in her honor will be held in Westwood.

In lieu of flowers, donations may be given to the National Society of the Colonial Dames of America in Connecticut (NSCDA-CT), 211 Main Street, Wethersfield, CT 06109, or Old Colony Hospice and Palliative Care, 321 Manley St., West Bridgewater, MA 02379.