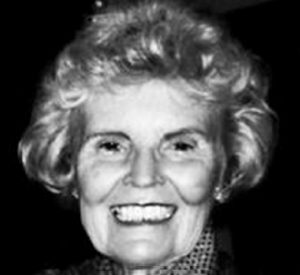 This is a revised obituary.

She was a member of the Colonial Dames of America and direct descendant of pilgrims Miles Standish and Priscilla Alden, as well as Jonathan Trumbull, the first governor of Connecticut. She was born in New York City. She married William W. Wilcox V in Englewood N.J. in 1948 and moved to West Hartford, Conn. where she brought up three children – Ellen, Priscilla, and Wil. During this time they bought a condo in the Boca Grande Club, where Bill’s family had visited since the late 30s. They later built a home on Palm Avenue. Here she continued her passion for gardening as a member of the Boca Grande Garden Club and Planters of Boca Grande. She also served on the Board of Directors of the Boca Grande Historical Society and was a member of the Woman’s Club. She enjoyed golf at the Lemon Bay Golf Club. She was an avid fisherwoman and won third prize in the 1966 annual Field and Stream Tarpon Fishing Tournament by catching a 175-pound tarpon. She was also featured in a 1999 article on tarpon fishing in the Tarpon Times of the Boca Beacon regaling both Bill’s and her love of tarpon fishing. She was predeceased by her sister Mary Van Buren and brother Bill Trumbull. She is survived by her husband Bill of 71 years, her sister Anne Chapin and her children Ellen Wilcox, Priscilla Wilcox, and Wil Wilcox and her grandchildren Tara, James, Lindsay, and Whitney and her great grandchildren Ellie, James, Cian, and Ronan.

In lieu of flowers, donations can be made to the Boca Grande Historical Society, PO Box 552, Boca Grande, FL 33921.