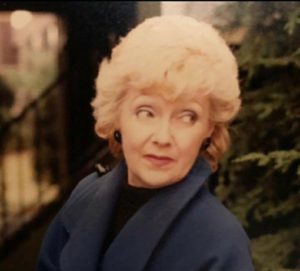 Ms. Pat LaSalle was a celebrated local author of two novels, “Run For Your Life” “Taken By Terror,” written while living in Englewood.

Her daughter, who has worked on the island, worked with her on the books, as assistant editor and both covers as Illustrator PJ Parker.

LaSalle was featured, right here at the Island Library of Boca Grande when the sequel came out for a book signing. In addition, this talented lady, sold Florida style hand painted furniture on Dearborn Street in Englewood.

Patricia Bermingham (Colgan, Cunningham) LaSalle was born in Scotland, in the 30s, the youngest of four girls. She came to America when she was 12, through Ellis Island.

Her family settled in Merchantville, N.J. She attended the Kensington Girls High School of Philadelphia and was the valedictorian of her graduating class. She also starred in their production of Jane Eyre. She met Jack G. Colgan of Nebraska, who was a young stockbroker in Philadelphia. They built a stone house on the Main Line so he could commute by train. They had a girl, Nancy, then a boy, John and she was expecting their third child, Patricia, when she was tragically widowed. Later she had another daughter, Catherine, remarrying and had another son, Kerry. She divorced and later married John LaSalle of NJ, from whom she was also widowed. She was a breast cancer survivor of 15+ years.

She was an avid lover of the English language, and was a professional at RCA of Moorestown, N.J., working on classified information for the Navy for 20+ years. She retired to Englewood FL, for many years, then moved to Gainesville GA, where her son’s family cared for her in her last days. She leaves behind her adult children, their children and numerous great-grandchildren, in Georgia, Central KY, N.J. and FL. Everyone she met was taken in by her talent and love of writing, poetry and the arts.

Newer PostPROFILE: Susan O’Brien
Older PostLETTER TO THE EDITOR: Do your part in the battle against the spiny-tail iguanas of the island