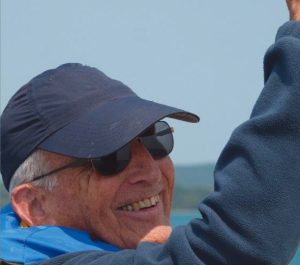 Nate was born March 18, 1929 in Chicago, Illinois, the son of Nathaniel Henry Whiteside Jr., and Mildred (Gould) Whiteside. He grew up in Hinsdale, Illinois and spent his summers at Glen Lake, Michigan with his family since 1931.

Nate loved attending high school at Kimball Union Academy in Meriden, New Hampshire, where he was involved in skiing and the Outing Club. On to Middlebury College, Vermont, in 1948, he was still involved the cross-country ski team and the Outdoor Club, especially enjoying the “Woodsmen’s Weekends” where he learned life-long skills. In 2005, he helped write a compilation edition of “The Woodsmen’s Weekend from 1947-1956.” He graduated in 1952 with a BA in economics.

After graduation he enlisted in the U.S. Navy Officer’s training.  He then served aboard the USS Hanna, a destroyer escort, as a gunnery officer at the end of the Korean War until December 1955.  Especially in his later years, Nate enjoyed recounting his years of Naval service.

Nate met his wife in San Diego while in the Navy.  On August 20, 1955, in Bad Axe, Michigan, he married Mary Herrington.  They enjoyed a very active life with their three children including skiing, boating, card games, travelling, and spending time at Glen Lake, Port Austin, Vail, Sanibel, and Boca Grande, Florida.

Nate and Mary lived in Hinsdale, Illinois and Northville, Michigan raising their children while also spending vacation time at Glen Lake, Michigan during all seasons. Five generations of the Whiteside family, spanning 87 years, had deep ties to the Glen Lake Community.  Having grown up spending his summers at the lake, Nate learned many boating, sailing, and life skills while becoming an expert sailboat racer. In 1950, with his sister as crew, he accomplished a perfect racing season, losing no races, and achieved recognition as the Snipe Class International high point winner.  Active initially during the war in the Glen Lake Yacht Club, he participated and helped grow the Snipe, MC Scow and Butterfly fleets.  At various times he also served as Treasurer, Rear Commodore and Commodore. Nate was also was involved in the Glen Lake Association and the Crystal River Dam project in the area.

After serving in the Navy, Nate began his professional life in the Municipal Bond and Securities printing industry, by joining his father at Northern Bank Note Company in Chicago. In 1972, he purchased Midwest Bank Note Company, in Plymouth, Michigan. Nate’s natural inventiveness enabled him to lead his company into the age of technology.  His son Jim joined him in the business and together they, along with older son Charlie’s consultation, adjusted to economic influences that also included other printing specialties.

Following retirement, Nate and Mary spent time on Sanibel Island, Florida and later Boca Grande. Making many special friends there was highlighted by forming the Boca Bay Yacht Club, activities and boating excursions associated with living on the Gulf Coast, along with tennis, social functions and entertaining guests.

IIn addition to his close family ties, Nate formed many meaningful, enduring friendships throughout his life.  His calm, gentle nature, warm smile, honesty, fairness, love of the outdoors, knowledge and eagerness to teach others, created wonderful memories of a great man who will be so missed by many.

Please share your thoughts, memories and photos of Nate with his family by visiting bartonfuneral.com.