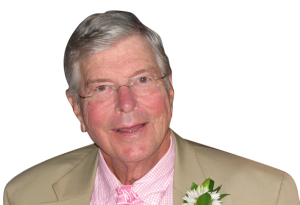 Michael (“Doc”) T. Jaekels, M.D., who helped bring thousands of babies into this world as a career obstetrician and gynecologist, passed on February 15, 2017, at the age of 86.

He was a resident of Elkhart Lake and Shorewood, Wis., former resident of Boca Grande and Fox Point, Wis. He was the loving husband of the late Nancy H. (nee Hirschboeck) Jaekels, and he is survived by Chris (Jean) Jaekels, Ted Jaekels, Mia Jaekels Vlaar, Andy Jaekels, Julie (John) Best and nine grandchildren.

Doc attended the University of Notre Dame on a basketball scholarship but left early to enroll at Marquette University Medical School (now the Medical College of Wisconsin). He took his Ob/Gyn internship at Henry Ford Hospital in Detroit and his residency at Mercy Hospital in Chicago. He served in the United States Air Force.

While in medical school he met Nancy, the Dean’s niece, and a lifelong love affair began. Doc and Nancy made their life together, raising their five children in Fox Point. Doc and Nancy’s circle of friends grew on the lake at Elkhart Lake and on the beach at Boca Grande. Doc had a calm, reassuring demeanor that made him a great husband, father, physician and friend.

He was a 20-plus-year resident of Boca Grande and a member of Our Lady of Mercy Parish, the Boca Grande Men’s Club and the Past Masters Tennis Club. Services were held in Fox Point on February 24.

The family invites donations in Doc’s name to Our Lady of Mercy Parish. A guest book is available online at feerickfuneralhome.com.

Newer PostMore than $35,000 raised for SHS: Thank you, Boca Grande!
Older PostFor 90 years the sentinal has stood … and now the Light is finally ours!