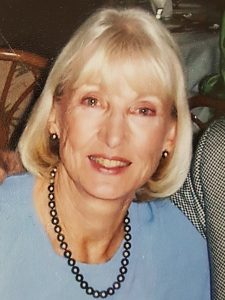 Maribeth Ann Perry Cunningham passed away peacefully at her home in Boca Grande on May, 17, 2020. She was born at Presbyterian Hospital in Chicago, Ill. on November 19, 1934, to U.S. District Court Judge Joseph Samuel Perry and Nelle Blanche Brookman Perry.

Maribeth graduated from Northwestern University with a Bachelor of Arts in English. She was a member of Pi Beta Phi sorority where shemade lifelong friends. Originally a resident of Illinois living on the North Shore of Chicago, she and her beloved Patrick enjoyed their home in Winnetka, Ill., and then in Northfield, Ill.

They became snowbirds and Florida residents after purchasing a home in Boca Grande, on the Gulf. They also enjoyed their lifestyle in Telluride, Colo., where they were an active part of the community for over 30 years. They also owned a ranch in Ridgeway, Colo., where they raised horses for 12 years. Maribeth also maintained two cottages on Lake Michigan in Covert, Mich.

​Maribeth enjoyed horseback riding since childhood, skiing, tennis, golf, and bridge. Maribeth exuded elegance, grace and style and was a kind and thoughtful person. She was a talented dancer and active member of the dance troupe “Off The Ground Productions” on the North Shore.

She and Patrick were known for their kindness and generosity toward others. Maribeth was loved by so many because she shared her fierce love of lifewith zest and compassion toward others. She will be greatly missed by her family and by her manyfriends.

​A celebration of Maribeth’s life with her family and her nearest and dearest friends will take place on Friday, November 6, 2020, at 1:30 p.m. at the Power House at Boca Bay Pass Club in Boca Grande.