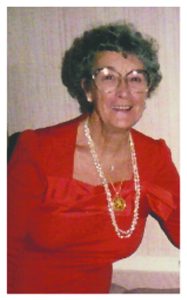 Marguerite Agnes East passed away on April 27, 2020, at the age of 105, in Fort Myers, Florida. Marguerite was born on November 7, 1914 in Halifax, Nova Scotia. She was the third of nine children born to George Oliver Ellard and Agnes Painton Ellard.

Marguerite was full of energy and always looking for an adventure.  For many years she and her husband, William P. East, were able to travel extensively while residing in Indonesia until their retirement to Boca Grande, Florida in 1967.

While living in Boca Grande, Marguerite was a member of the Woman’s Club and involved with Boca Bargains, where she was one of the founding members. Marguerite loved the island and its history, and in 1976, she developed and published a booklet about Gasparilla Island by Ann Daly Tretter, titled “Island of the Mind: Gasparilla.”

Many vacations were enjoyed by family and friends at her home across the street from The Gasparilla Inn. Marguerite loved the water and continued to have a daily swim well into her 90s. A visit to Marguerite’s home always included bike riding late at night, up and down the darkened streets of Boca Grande to smell the night-blooming jasmine, swimming in the Gulf of Mexico on warm sunny days, shelling along white sand beaches, and a game of cribbage with a cup of tea on the patio every afternoon.

After Bill passed away, Marguerite continued to travel the world, leaving in May and returning in October, visiting friends and family along the way. A typical summer might include the United States & Canada, Russia, South Africa, Germany, China, Australia, New Zealand and Ghana. Marguerite enjoyed traveling through Elderhostel programs, which allowed her to meet new people, visit new places and learn the history of each country. Marguerite was never afraid to try something new, or to travel alone. In her 80s, she went bungie jumping in New Zealand and dove off a ship into frigid water on a dare while cruising the Baltic Sea.

She is survived by her son, David Newcombe, and his wife, Shirley; step-daughter Melodie Grice; as well as many nieces and nephews.

Newer PostLETTER TO THE EDITOR: The lunatics are out, indeed…
Older PostPROFILE: Melissa Csank