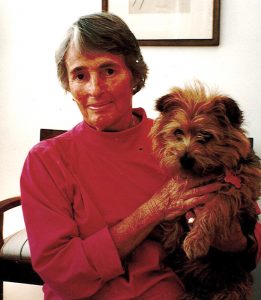 She was born Lucy Jane Keeler in Evanston, Illinois, and was the daughter of Lucy Derwent and Edwin R. Keeler, who was later president of the Rockford Lumber and Fuel Company.

Lucy grew up in Winnetka, Illinois and attended the Shipley School and Pine Manor Junior College. In 1942, she married James H. Stanton, then a naval lieutenant. After his war service they lived in the San Francisco Bay area, moving east in 1948 and settling in northern Westchester County, New York.

Lucy worked in several capacities for the Bedford-Rippowam School and in 1975, together with the late Jane Burditt, she started the still-flourishing teacher-placement firm Educator’s Ally. Its founders are described as “two innovative independent school administrators who saw the need to connect exceptional teachers with independent schools that demanded high levels of expertise, ability and character.”

Lucy and Jim bought their historic fisherman’s cottage on Park Avenue in Boca Grande in 1983 and made it their permanent home in 2005. She was active in local charitable organizations and was one of the founders of the non-profit thrift store Boca Bargains, which supports scholarships and local charities and is sponsored by the Boca Grande Woman’s Club.

Ever inquisitive and independent-minded, Lucy gave her committed support to issues of human rights and justice for all. Lucy inherited her flair for art and design from her mother and created imaginative and colorful spaces in the Boca Grande house as well as earlier residences.

A loving and generous wife, parent, and friend, and a person of unquenchable vitality, Lucy created a home full of laughter, brightness, and optimism.

When asked how she wanted to be remembered, she said that she loved life and the people in her life. Lucy greatly missed Jim, her husband of 73 years, who died in early 2016. She is survived by her daughter, Lucia (Cinder) Stanton; her sons Timothy (wife Sherry), Peter, and Christopher (wife Lori Fouts); five grandchildren; three great-grandchildren; and numerous nieces and nephews.

The Stanton family is extremely thankful for all the friendship and support of Boca Grande residents, as well as the compassionate care over the years of Grace and Michael Ott of My Halo, Mary Kane, Dana Malagisi, Wendy Herda, Yuko Seman, the Boca Grande Fire Department and the staff of the Venice Tidewell Hospice.

Memorial donations may be sent to Tidewell Hospice, 220 Wexford Boulevard, Venice, FL 34293, or to the charity of your choice.