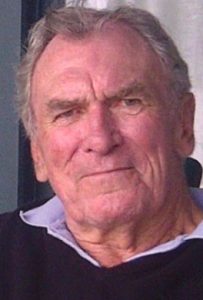 Kevin Hughes of Yarmouth, Maine and Boca Grande Florida passed away peacefully on August 25, 2018 at his home in Boca Grande. He was 84.

Kevin attended Cheverus High School and Bowdoin College, with a hiatus to serve in the Korean War, returning to graduate in 1956.

He was employed by Proctor and Gamble, and was then tapped to join the founders of CVS in their first year. His charismatic leadership and commitment to customer service helped propel CVS to one of the largest pharmacy chains in North America.

Kevin became a fan of Boca Grande in the 1980s. He married Deb Martin in 1986, and they bought a home there in 1991. Although Maine was his home, he loved the Island and found a place very close to his heart. He spent most of his retirement winters in Boca Grande, enjoying boating, his dogs and his many wonderful friends and family.

Kevin was a Mainer to the core. He was happiest at their island cottage on Bustins Island, Maine or home in Yarmouth.  It was in his soul.  He loved introducing friends to Maine, and sharing his homes with family and friends. Whether on his boat, The Merganzer, lobstering, clamming, picnics on the rocks, anything and everything that Maine had to offer, made him happy.

Kevin had a quick wit, a brilliant sense of humor, and a lovely twinkle in his eye. He was a loyal friend, and a good husband and father.  Animals flocked to him, children adored him, and we all were a little richer by being in his presence. For all who knew and loved him, he will be profoundly missed.

He is survived by his wife, Deborah Martin, and four children from a previous marriage to Mary Ann Flanagan; Kevin Michael Hughes (Renee) of RI, Dianna Hughes Olmsted (Ken), of Maine,

Susan F Hughes, of Tennessee, and Patrick B Hughes (Kathy) of Maine, and grandson Evan Michael Olmsted of Maine. He is also survived by his brothers, Peter B. Hughes of Maine and William L. Hughes Jr. (Dave) of California, and many cousins, nieces and nephews, to whom he will always be their beloved “Jake”.

A private family service will be held in Boca Grande, Florida and Yarmouth, Maine.

Gifts in memory of Kevin may be given to: