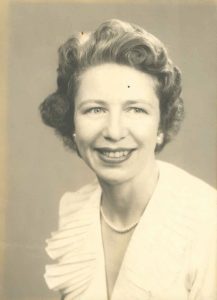 Katherine Kennedy Barney (Kay) died peacefully in her sleep at home on Nantucket on August 1, 2017. Her husband, William Hadwen Barney, preceded her in death last year.

Mrs. Barney was born on September 8, 1919 in Brooklyn, N.Y. She was the daughter of the late Colonel and Mrs. Grafton Sherwood Kennedy. As an Army brat she moved to a number of different places in the United States. She graduated from the Brimmer and May School and Wellesley College.

She was presented to society in Boston and Dayton. After college she was the society editor of the Dayton Journal-Herald and Boston Herald. During World War II she was a submarine watcher on Nantucket.

While in College she was a member of the glee club. On August 12, 1944 she and Bill Barney, who had been in the Bowdoin glee club, recognized each other while waiting for the Sunday papers at The Hub on Nantucket. Both the Barney and Kennedy families had homes on Nantucket. On the 13th he proposed and on September 25th they were married at Christ Church, Cambridge. While Bill was in the Pacific she and her sister moved to North Hollywood, CA where she had a nursery school, and volunteered greeting incoming Navy ships with many well-known celebrities.

When Bill returned from the War they moved to Havre de Grace, MD; then to New Castle, DE; Birmingham, MI; and Long Island. In 1991 they settled in Boca Grande, FL and divided their time between Boca Grande and Nantucket. During these years Mrs. Barney was involved with garden clubs, the Junior League, the Alliance Francais, (she always wanted to practice her French), women’s clubs, the Wellesley Club, the National Society of the Colonial Dames of America, and the DAR.

Mrs. Barney was a direct descendant of Governor Thomas Dudley, first colonial governor of Massachusetts and a founder of Harvard College and Cambridge. Both she and her husband were Starbuck descendants.

Mrs. Barney is survived by her daughters Katie Barney, and Lili Calabrese and her husband Pat; and son Bill Barney and his wife Ruth; seven grandchildren and their spouses; and eleven great-grandchildren.

A memorial service will be held on August 9 at 11AM in Prospect Hill Cemetery at the Barney-Swain plot.