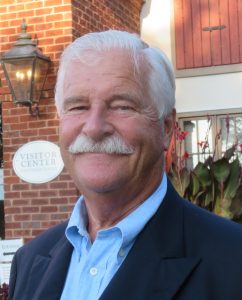 Julian was a graduate of Tonbridge School and attended City of London College and the University of Dijon. He was a lieutenant in the Royal Marine Reserve, where he served proudly for four years. In September of 1973, he was married to Mary Tayloe Harrison of Old Brookville N.Y. In 1977, the Keevils settled in ManakinSabot, Va.

Julian worked for Robertshaw Controls for 12 years and then spent the balance of his career at Universal Corporation as their International Financial Liaison.

He was a man of richly-varied interests, both in the U.S. and the UK. He was past Master of both the Worshipful Company of Poulters and the Worshipful Company of Pipe Makers and Tobacco Blenders in the City of London. He was also a member of the Naval and Military Club in London, Piping Rock Club in Locust Valley, N.Y., The Gasparilla Inn and Club in Boca Grande, and The Commonwealth Club, The Country Club of Virginia and the Deep Run Hunt Club, all in Virginia.

Julian was a classic car enthusiast, a keen foxhunter, an avid gardener, and he cherished any time spent with friends and family.

A private family service will be held in Manakin-Sabot, Va.