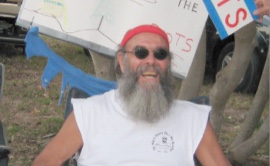 Joseph “J Baldy” Rinaldi, 76, passed into the never on Sunday afternoon, Feb. 10, 2019, surrounded by family and friends. He died from complications related to his battle with lung cancer.

Baldy was born Joseph Leonard Rinaldi on April 21, 1942 to Joseph C. and Dolores F. (Colapietro) Rinaldi in Springfield, Massachusetts. He graduated from Springfield Technical High School, and served his country for four years with the United States Navy aboard the USS Mullinex, and two years with the Naval Reserve. He later worked as a lineman for American Telephone and Telegraph and represented his co-workers as a business agent for the local union. Before moving to Maine he met and married Sheila (Barrett) Rinaldi, and together they raised three sons in Springfield, Mass. and Litchfield, Maine.

Baldy spent the rest of his years creating a homestead and a lifestyle envied by all around him. When he was not enjoying gardening, building, and creating his homestead through the summer months in Maine, he could be found roaming the beaches of Southwest Florida. Wherever he was, he was surrounded by people who viewed him as a father, as a brother and as a friend. He will be sadly missed.

His parents, Joseph and Delores, and his brother, James Victor Rinaldi, predeceased him.

He is survived by his sister, Patricia Ann Rinaldi; his ex-wife, Sheila Rinaldi; his sons, Michael, Joseph and Anthony; his grandchildren, Lyndsey, Nicholas, Kayla, Timothy, and Vincent; great-grandson, Jackson; and several nieces and nephews.

A Celebration of Life in the form of a pig roast at J Baldy’s homestead in Maine took place this month.

Condolences may be expressed to the family at KincerFuneralHome.com.