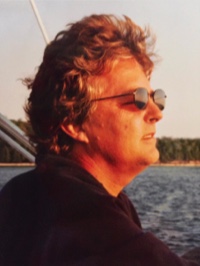 Jon Haas passed away peacefully on Saturday, October 14 at AngelsGrace Hospice in Oconomowoc, Wisconsin. Jon is survived by his wife and sweetie of 43 years, Mary, along with his children Annie, Joe, and Jackie; grandson Banyan, and Pappy to Maddy and Jack; brother, Dave, and honorary daughter (niece) Laura. Jon was an entrepreneur and inventor. He had a brilliant mind that was constantly moving from one idea to another, always thinking of ways to make things better. He was one of the founders of the Oconomowoc Company, and years later, Earth Tool Corporation. Jon certainly was all about working hard, playing hard, and most importantly, having integrity. He was also adamant about giving back to the community and helping those (anonymously) in need. At the end of the day, he lived by the golden rule. Take care of yourselves. Hold each other a little closer. Don’t forget to say “I love you.” Appreciate what you have. Promise less, deliver more. Trust your gut. Go on that vacation. And don’t forget to be wise. Morning, noon, day and night, Jonny Haas is outta sight. Yessir. Memorials to AngelsGrace Hospice are appreciated.