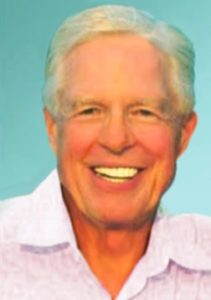 John I. Shaw Jr, 82, of Southport, Conn., died peacefully on Friday, December 1, 2017 at Bridgeport Hospital from complications of a rare autoimmune disorder. He was surrounded by family members while listening to his beloved Whiffenpoof Song.

Known as “Shawsie” to his grandchildren and many close friends, John was the quintessential gentleman/gentle man.

John was predeceased by his beloved sister Susanne Shaw Hooe and her husband Nelson. He also leaves his half-sister, Barbara Potter, and two half- brothers, Arch W. Shaw and Bruce P.Shaw and families.

Born in Lake Forest, Ill., John attended for six years St. Mark’s School in Southborough, Mass. where he was president of the Glee Club. At Yale University, he was a member of the Augmented Seven and his dream came true when he was tapped as a Whiffenpoof, and became John “By the Sea” Shaw.

John and Ann spent their joyous years together living in Nantucket, New York City, Southport, Conn. and Boca Grande. In Nantucket, John was active in local theatre, a member of the Wharf Rat Club and the Romeos. In Boca Grande he and Ann sang in the choir at St. Andrew’s Episcopal Church and were members of the Boca Bay Pass Club. John was active in local theatre and was MC and later president of the Boca Grande Mens’ Club.

Singing with his Whiff Alums, flyfishing, tending roses in his garden, and socializing were among “Johnny’s” greatest joys. He was the most wonderful father, grandfather, loyal friend and a trusted counselor to so many. Always one to ask what was new with you and your family – even when he was down and out – he possessed old-world manners and a supreme sense of decency. John was truly one of a kind.

A celebration of John’s wonderful life will be held in the spring at Southport Congregational Church.

Newer PostProfile Jack Cosgrove
Older PostArt Center thanks all island businesses, organizations for their support of the arts