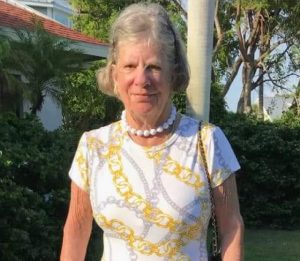 Jean Howard, a long-time resident of Boca Grande, passed away on Saturday, Sept. 19, 2020 at her home. Her family and caregivers were by her side.

She was born on December 17, 1939 and grew up in Manhattan. Jean graduated from Chapin, where she loved tennis and horseback riding. She continued to do both throughout her life.

Jean was a loving mother and stepmother, a loyal friend and a devoted grandmother with a wry sense of humor.

She is preceded in death by her parents, Mr. and Mrs. Reginald Hiscoe, and her devoted husband, Reese Evans Howard.

She is survived by her daughter, Hilary Graham Ponti (Andrea) of London, England, her son, Michael Graham, and three stepchildren, Reese E. Howard Jr., Suzie Howard Oates and Catherine Howard. She also leaves behind six grandchildren and seven step-grandchildren whom she cherished.

A Celebration of Life will be held later at Norfolk Cemetery in Norfolk, Connecticut.

In lieu of flowers donations can be made to the Jean H. Howard Memorial Caregivers Fund. Please make check payable to Mike Graham Household Fund. Checks may be deposited at Englewood Bank and Trust in Boca Grande or mailed to PO Box 1963, Boca Grande, Florida, 33921. Donations can also be made over the phone using a credit/debit card, (941) 964-9096. The donations will be a small gift of gratitude for the caregivers who helped Jean have a quality life in her last few years.