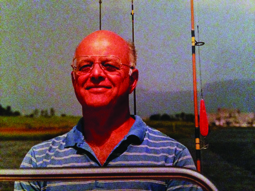 James Spencer Pasman, Jr., corporate executive, devoted family man, sportsman, bibliophile and patriot, died peacefully at his home in Boca Grande, FL on November 6, 2016 with his wife and children by his side.

Jim was born on December 20, 1930 in East Orange, N.J., the son of James Spencer Pasman and Adele Pretot. He attended Lafayette College, interrupting his studies to enlist in the U.S. Air Force during the Korean War. He served as a radar observer for more than four years, earning an honorable discharge as First Lieutenant, and returned to school to earn his BBA at Upsala College.

He began his financial career with Francis I. DuPont and then Commercial Credit Company in New York City, at which time Jim also earned his MBA from New York University. To his colleagues and competitors, he was known as tough but fair and treated everyone the same – with respect, dignity and a positive word. He was a mentor to many.

At Rockwell International and Allis Chalmers Corporation he worked as treasurer, before joining the Aluminum Company of America (ALCOA) in 1972, where he served in a variety of senior positions – chief financial officer, executive vice president and vice chairman – in a 13-year career with the Company. In 1987, Jim became Chairman and Chief Executive Officer for Kaiser Aluminum and Chemical Corporation and finished his career with National Intergroup, Inc. as President and Chief Operating Officer and as Chairman of the Permian Corporation. Jim served as a Director on the Boards of Credit Suisse First Boston, Education Management Corporation, Kaiser Aluminum and Chemical Corporation, PNC Corp., PNC Bank, Bell Telephone Company of Pennsylvania, ALCOA, National Intergroup Inc. and Permian Oil Company. He also volunteered his time on the board of The Children’s Institute of Pittsburgh. To his family, he was a natural born teacher who embraced living and taught others, by example, to do the same.

His interests were many and he pursued them with skill and passion. Weekends were devoted to family and friends, playing golf, skeet shooting or building reproductions of classic furniture in his workshop. Vacations were adventurous retreats that included sailing, skiing and fishing.

In his later years, Jim was an avid Bridge player and voracious reader. Jim and Jane contributed to the communities in which they lived, with donations to The Children’s Institute of Pittsburgh, Nantucket Conservation Foundation, Boca Grande Health Clinic and Johan Fust Community Library. Jim is survived by his wife of 59 years, the former Ellen Jane Kullman, his son James Spencer Pasman, III, of Boston, MA, daughters, Suzanne Tracy Pasman of San Francisco, CA and Caroline Pasman Craig, and son-in-law Richard Paul Craig, of Mill Valley, CA – and by four grandchildren – Hannah Evans Pasman, Olivia Cardinale Pasman, Tristram McNab Craig and Catherine Spencer Craig. A celebration of his life will be held in Boca Grande, FL at a later date.

Donations in lieu of flowers may be made to the Boca Grande Health Clinic Foundation, Johan Fust Community Library or a charity of the donor’s choice.