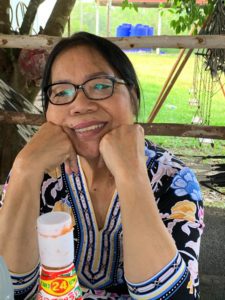 Jam “Noy” Vollmer, 68, passed away on Thursday, Jan. 14 with her family by her side. She was born October 12, 1952 in Nakhon Phanom in upper northeastern Thailand. She worked at the NKP Air Force Base there, which is where she met her husband, Mike Vollmer, of Syracuse, N.Y. while he served in Vietnam. When Mike went home Noy soon followed, flying into San Francisco to the United States. Noy and Mike then went back to Syracuse where they had their children – Jadon (Jason), Patrick and Alonya.

She was preceded in death by her father, Hang Charmart, of Thailand.

A Celebration of Life service will be held at a later date.