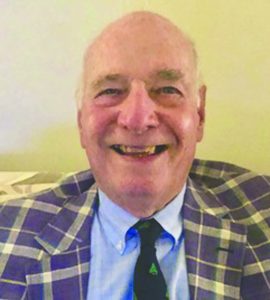 He was predeceased by his wife Mary, brother Norman and parents Harry and Bertha.

Jack grew up in Bromley, Ky., spending most of his youth playing basketball and football. He spent his summers waiting tables in Ocean City, N.J., where he discovered a love for the beach.

After graduating from Georgetown University, Jack immediately joined the U.S. Army and served during the Korean War. He was stationed at Fort Sam Houston in San Antonio, Texas.

When his military duty was over, he went back to the Midwest to work for his brother Norm in the shipping industry. In 1960, Jack moved to New Jersey. He leased office space in New York and started his own freight forwarding business. He was the second-ever tenant in One World Trade Center and kept his offices there until 2001.

He met Mary in 1961 on a blind date. They were happily married for 54 years and raised their family in Allendale. Jack and Mary traveled the world, and especially enjoyed their yearly vacation with friends at The Anchorage Hotel in Antigua, British West Indies.

In 1979, Jack discovered Boca Grande. He immediately fell in love with the crescent beach and purchased a condo at the Boca Grande Club in 1980. In 2002, Jack and Mary made Boca Grande their primary home and spent summers in Allendale.

Jack was known for his fun-loving nature, enormous generosity, kindness, integrity and great sense of humor. All of his friends enjoyed attending his Kentucky Derby parties. Many fun times were had with his family and friends attending New York Giant football games. He loved telling stories of his adventures during his childhood, he enjoyed watching horse racing and sports on TV, and doing puzzles that the grandkids sent him.

He loved God, his family, his friends and his country. Jack lived a full and wonderful life. He will be greatly missed by his family and friends.