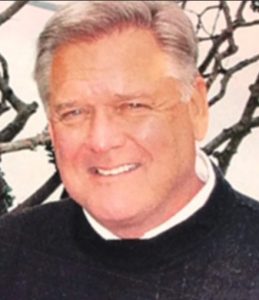 John “Jack” Byers Horner of Boca Grande and Richmond, Virginia passed away peacefully and surrounded by his family on January 17, 2019. Jack was born in Lynchburg, Virginia on December 18, 1937. He was the son of Dave and Kitty Horner of Lynchburg.
He is survived by his loving and devoted wife of 58 years, Kathy; and his two sons, Ashby (and his wife Melanie) and Sherman (and his wife Cecelia); and 6 granddaughters, Brittany, Reny, Breen, Ellie, Claire, and Katie. Jack is also survived by a brother, L. David Horner of Vero Beach, Florida, and three nieces.
Jack earned his B.A. in Economics from the University of Virginia in 1959, where he was a member of the Naval ROTC Program and Sigma Alpha Epsilon Fraternity. After graduating from UVA, Jack proudly served his country in the United States Navy from 1959-61. Then after 26 years of service in the United States Naval Reserves as an intelligence officer, Jack retired as Captain in 1987.
Jack began his business career with State Planters Bank in Richmond where he served as branch manager. He later joined Wheat First Securities and became an account executive and financial planner who was regarded for his amazing care of and complete fidelity to his clients. He retired from Wheat First Securities, which eventually became Wachovia Securities, in 2000.
One of the great joys of his life was his involvement in the Jefferson Scholarship Program at UVA as well as serving for a term as president of the UVA Richmond Alumni Association. Jack also cherished his involvement with the Virginia Home for Boys and Girls, serving both on the Board and as president, and with the Richmond Rotary Club.
Jack was able to live out his true passion as an oil, watercolor, and pastels painter in Boca Grande, Florida where he and his wife have been residents for the last 20 years. An accomplished member of a number of prestigious national art organizations, Jack presented his paintings in numerous galleries and private exhibits and humbly received a number of recognitions for his artwork. Jack also served as president of the Boca Grande Art Alliance. An insatiable pleasure of his was planning for and teaching his annual “ Watercolor for Dudes” class in Boca Grande. Jack always lit up a room with his smile and gregarious demeanor. Jack was a true gentleman and a true friend to all.
In lieu of flowers, donations may be made to the Boca Grande Health Clinic.