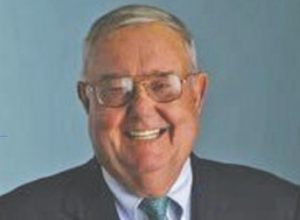 Born in Charlotte, NC to Henry Register and Deane Ritch Lomax, he lived most of his life in Charlotte while spending several formative years in Wrightsville Beach. After graduating from Charlotte’s Central High School in 1953, Henry completed his undergraduate and law degrees at the University of North Carolina at Chapel Hill in 1958. A Sigma Chi brother at UNC, he met Trissy while waiting tables at her Delta Delta Delta sorority house. They fell in love and married in 1955.

Upon graduation from law school, Henry was the first associate hired at the newly formed law firm of Kennedy Covington Lobdell & Hickman in Charlotte, where he practiced his profession with distinction until his retirement in 2000.  Henry was deeply involved in growing the firm, including early roles leading the recruiting and finance functions.  He was instrumental in developing its real estate practice into the premiere such group in the Southeast.  He served in the role of firm managing partner from 1995 until his retirement.  In that capacity he led the growth of the firm into Raleigh and upstate South Carolina.  His reach and legacy in the Carolinas’ legal community is broad and deep. Countless professionals in the region practicing today cherish his mentorship, humor, integrity and friendship.

In addition to his legal practice, he was an active investor with and mentor to real estate practitioners across the region.  In this activity, his business acumen, leadership, humor and generosity was manifested in many successful ventures and companies across the Southeast.

Henry and Trissy were charter members of Saint John’s Episcopal Church in Charlotte.  There his leadership and dedication was evidenced by his service as Senior Warden on the vestry and by cultivation of the music program so dear to Trissy’s heart.

Henry’s passions included fishing, boating, golf, raising tropical plants and traveling.  He continued to enjoy those activities during his retirement years spent between his homes on Lake Norman and in Placida, Florida.