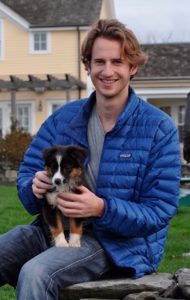 Guy Robert Horgan succumbed to a virus that affected his heart. He died in his sleep on August 6, 2018. He was 27.

Guy was born in Exeter, New Hampshire to Robert and Darcy Horgan and raised in New Castle, New Hampshire. Guy spent his formative summers on Indiantown Island, Maine and his winter vacations in Boca Grande.

He graduated from Philipps Exeter Academy, and after an adventurous gap year traveling the globe, teaching English in Africa and studying Spanish in Cuba, his pull towards business led him to Babson College. He found employment with Google in Silicon Valley immediately following graduation, and from there a San Francisco real estate start-up company called Opendoor recognized his unique blend of boundless energy and innate leadership talent and enticed him to join their vibrant new company, promising unlimited potential.

In his two years there he quickly rose to regional home advisor manager for the east coast and had recently relocated to Atlanta, Georgia.

All who knew Guy were impressed with his insatiable curiosity. Every person and every corner of the globe was worthy of his attention. Friends have remarked that he inspired them to strive to be more that they could ever imagine. Friends were captivated not only by his keen intelligence and insight but also by his quick wit, unique laugh and quirky sense of humor. From speaking French like a Frenchman to his perfectly fitted shirts and his almost encyclopedic knowledge of fancy cars and rap music, Guy lived large and scooped many into his exciting orbit.

Guy loved Boca Grande and for the last 15 years spent every vacation moment he could here on the island. He had many “island friends” and he cherished them and his time here on Boca Grande.

A celebration of his life was help at Philipps Church on the grounds of Philipps Exeter Academy on September 8.