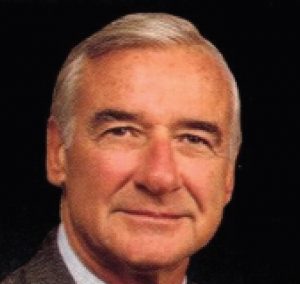 He was born in Chicago, Illinois to George & Lucy Baker.

After graduating from Carl Shurz High School in Chicago he attended Coe College graduating in 1951 with a Doctor of Commercial Science (honorary, 1974).

He was employed by Continental Illinois National Bank of Chicago where he rose to the level of Executive Vice President. He was a director for W.W.Grainger Inc., Reliance Group Holdings, The Midland Company, Williams Electronics Inc., American Finance Enterprises Inc.,

He was a Trustee of Children’s Memorial Hospital, The Field Museum of Natural History and Coe College.

George was a stellar bridge player, loved the game of tennis and he and his wife traveled the world extensively.

Favorite Boss, smart as a whip, motivator, storyteller, witty, irascible and giving are some ways to describe George Baker.

He worked hard and enjoyed life. His life motto: Clean living and hard work (said with a wink).

Donations can be made to the Suncoast Humane Society.