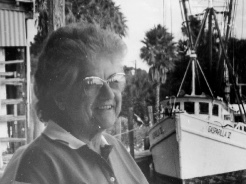 Eunice Albritton, known for her part in The Fishery’s history and whose father, Walter Gault, ran the old fish house there, has passed away.

After Gault’s death Mrs. Eunice took over management of the Gasparilla Fishery. Eventually the popular Fishery Restaurant was built.

The Albritton family ran the Gasparilla Fishery, Fishery Restaurant and a fleet of shrimp boats for many years. The Gasparilla Fishery was a place where thousands of pounds of fish and shrimp were once delivered by the local fishermen daily. The seafood was then processed, packed and sent all over the country.

The Gasparilla Fishery was once the heart of the Placida that supported many families for more than half a century.

Mrs. Eunice’s obituary is pending. We will run it as soon as we have it.