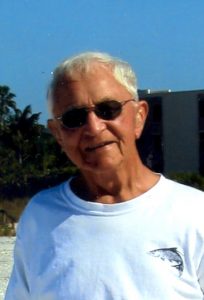 He came to Duluth to work at St. Luke’s Hospital and went on to become head of radiology and chief of staff. His career also included being a clinical professor in radiology at UMD Medical School, and he also lectured at Lake Superior College to the radiology technologists. He was a Fellow of the American College of Radiology and practiced medicine for over 50 years.

Curt served as a U.S. Navy physician in both WWII and the Korean conflict and served on the USS Stembel 644.

He enjoyed spending time fishing and wood carving. He loved Boca Grande and he loved playing tennis. He was also a long-time member of the Kitchi Gammi Club in Duluth, Rotary, and the Boca Grande men’s club.

Curt was preceded in death by his parents, brother Dean, sister Elaine and his first wife, Jane Thomas, the mother of their children.

Please leave a memory of Curt or words of support for the family at bellbrothersjarvidowd.com.

Newer PostThe end of a golden era: You will be missed, DR
Older PostPROFILE: Noël Crosby