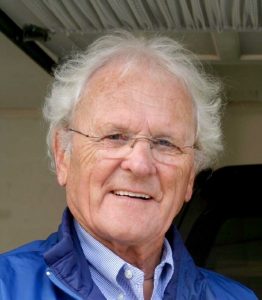 Blaine Eugene Davis, 83, son of Blaine A. and Arlene (Nadeau) Davis died July 21, 2019 at his family residence in Portland, Maine. Blaine was born in West Enfield, Maine and grew up in Lincoln, Maine. Most recently, Blaine and Sheila have resided in Boca Grande for 22 years.

Blaine graduated from Maine Maritime Academy and sailed as a Marine Engineer for the Moore-McCormack Lines throughout South America, East Africa, and the Baltic region of Europe. He is a retired naval officer; Lieutenant (j.g.) USNR. After his sea faring ventures, Blaine returned to college and graduated from the University of Maine (BSEE), Johns Hopkins University (Masters and Ph.D. in Applied Mathematics), and the MIT Sloan School (MBA). He worked initially at Bell Telephone Laboratories in Math Research and Systems Engineering at various Bell System facilities in New Jersey.

Lastly, he worked at AT&T headquarters heading various strategic planning and business development functions including the establishment of many of AT&T’s facilities and its corporate preence overseas.  This international development activity required extensive travel in Europe, Central America, and South East Asia.  After 30 years of service, he retired serving on selective boards, both corporate and non-profit.

Having established a home on Gasparilla Island, Florida, Blaine spent most falls, winters and springs with his wife entertaining children and grandsons on fishing trips and excursions on the waters of Gasparilla Sound, Charlotte Harbor and the Gulf of Mexico.  Blaine was active in the Boca Grande Croquet club, having been a leader in the organization for over 20 years.  Blaine founded and managed the Boca Grande Invitational Croquet Tournament hosted by the Gasparilla Inn & Mallet Club for many years, and was recently honored when the annual event was renamed last year in his honor as the Blaine Davis Invitational Croquet Tournament.

In addition to his wife of 60 years Sheila Davis of Boca Grande, Florida, he is survived by his brothers Gerald Davis of Lincoln, Maine, and Terry Davis and his fiancé Betty Nadeau of Howland, Maine; by two sons, Jeffrey and his wife Tracy Lauchaire, and Edmund and his wife Tracy LaBrecque, by two daughters; Gizelle Chrisafis, and Devdra Griffin and her husband Dr. John Griffin; nine grandsons, Joshua and Zachary Chrisafis, Blaine and Corben Davis, Jacob and Patrick Griffin, and Charles, Chase, and Cooper Davis.  He was predeceased by a brother, Timothy of Lincoln, Maine.  A private memorial service will be held later this year.  A long time survivor of COPD, the family requests donations to the COPD Foundation (www.copdfoundation.org) or the Leukemia & Lymphoma Society (www.lls.org).