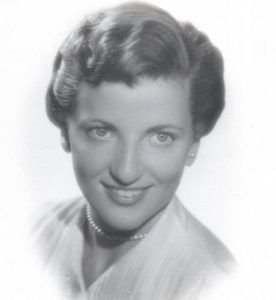 She is survived by her husband of 63 yrs., Donald Amos; their children; Ford Amos, of Sarasota and Donna (Robert) Engstrom of Natural Bridge, N.Y.; and grandchildren Unni Amos, Ford Engstrom, Arik Engstrom, and Shannon Engstrom.

Dorcas was born on November 12, 1933 and grew up in the St. Louis suburb of Richmond Heights. She graduated from John Burroughs High School. Dorcas was an expert equestrian, winning honors throughout the Midwest and South in the 1940s and 50s.

After graduating from John Burroughs prep, she attended Briarcliff J.C., where she captained the golf and equestrian team. Upon graduation she enrolled at Northwestern University’s school of education. It was there that she met her husband, Donald, and followed him to his U.S.A.F duty station in Madison, Wis.

Upon their retirement Dorcas and Donald moved to Boca Grande, and subsequently to Sarasota.