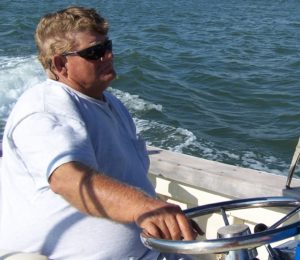 Raymond Ashley Coleman (also known as “Dickie” and “Pop Pop”), 79 years of age, passed peacefully on Sunday, January 24, 2020. He will be greatly missed by his wife Leslie, his children Matthew (Kristie), Charlie and Ashley; and his grandbabies Hudson, Lucas, Jacob, Ethan, Anabelle and Devyn, as well as many longtime friends.

Dick was born in Lake Wales, to Richard and Ethel Coleman, but moved to Boca Grande shortly after birth. Dick’s family has a long history in Florida and the Boca Grande/Cayo Costa area, as he was a third generation Floridian with island roots dating back to 1800s.

He graduated from Boca Grande High School, and went to college in Georgia for about one week, but since he couldn’t hear the mullet jump, he returned home.

Dick grew up in a commercial fishing and charter family and continued that tradition. Commercial fishing for mostly mullet and pompano kept Dick busy during commercial seasons. When those seasons closed he turned to charter fishing, knowing these waters better than most. Earning his captain’s license at the age of 18, he continued guiding until just a few years ago. Tarpon and mackerel charters were his specialty. Dick’s boat, Faithful II, was custom built for him to perform both commercially and chartering. This boat and the Casuarina, inherited from his dad, remain iconic and historic legends in Boca Grande Pass. After passing these vessels to is sons he found a new home in a boat he renamed Momma Leslie.

No matter the boat he remained a strong force in the fleet of tarpon guides. In the words of one of his fellow tarpon guides, “Dickie Coleman was one of the best at fly-lining any bait for tarpon.” He was a strong competitor in any of the tarpon tournaments, although he would have been happy without any tournaments and just being able to fish and do what he loved. Most of his life was built on his own business, although, and for a period of time he worked for Charles Englhard as his private boat captain. He also spent some time operating the pilot boat for the oil barge. When fishing allowed him some downtime, he took to woods and enjoyed hunting. He hunted throughout Central Florida, the Everglades, West Virginia, and Georgia.

As successful at fishing as he was, he probably considered his family his best and most joyful achievement. He and Leslie spent 46 years together (42 years of marriage) with some of that time spent commercial fishing together. She spent many a night on a cold, wet mullet boat with him. If that wasn’t going to run a woman off, there isn’t much that would. Her reward was being able to fish, except this time for tarpon fun.

They raised their three children together in their house on Damfiwill, as well as housing anyone who just needed a place to stay. Dick was always willing to help anyone in need. Their grandbabies brought him more happiness – and a chuckle or two – especially when he could teach them something ornery and get them to repeat it.

For a man of few words, there are many words that could be used to describe him. However, loved is pretty much the one the sums it all up.

We will be celebrating the love and wonderful life of Dick Coleman on Saturday, Jan. 30 at Whidden’s Marina at 4 p.m.