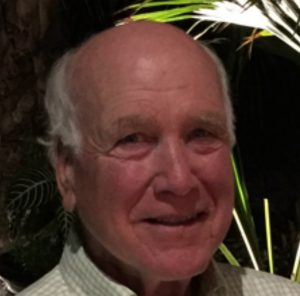 Dick was born July 23, 1935 to June Ranney Lyman and Richard P Lyman, Jr. in Lansing, MI.  Raised in East Lansing with family ties to MSU, he remained a loyal Spartan fan throughout his life.

He graduated from Dartmouth College, served two years in the United States Navy and received his MBA from the University of Michigan. He began his career as a business consultant with Touche Ross in Detroit, MI, moved to Grand Rapids with them and subsequently formed his own consulting company. He served on numerous community, business related and church boards, was a partner in Subaru by the Bay in Petoskey, MI, and a founding member of Lemon Bay Golf Club in Florida.

His wonderful sense of humor, beautiful, generous spirit and loving heart will be missed by his family and friends. He was a man of faith who dearly loved his family; at the head of the table at every birthday and holiday celebration, gave the loudest cheers at every child and grandchild’s sporting event, and gave the biggest hugs at every musical performance.

Throughout his decline he remained positive and always so appreciative of a beautiful day, a wonderful song, the chirping of birds and the bright blue sky. He was often heard saying “Life is good!” He was a much beloved husband, father, grandfather and “Popi.”

A Celebration of Dick’s Life will be held in Grand Rapids, MI on Friday, Oct. 4 at 11 a.m. at Westminster Presbyterian Church.  The family will greet friends on Thursday, Oct. 3 from 7 to 9 p.m. at the Metcalf & Jonkhoff Funeral Home.

The family would like to thank Clark Retirement Community and Emmanuel Hospice for their loving care during the past two weeks.

In lieu of flowers please consider making a contribution to Michigan Alzheimer’s Disease Center at the University of Michigan to support Lewy Body Dementia Research or the East Grand Rapids Schools Foundation.

Newer PostClearing the path for a new era
Older PostHelp us clean up! Traditional island clean-up this Saturday