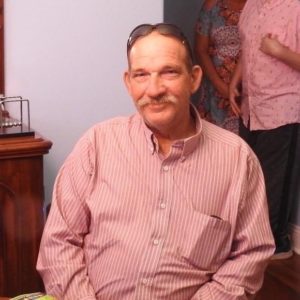 Allen was preceded in death by his father, Claude Sparks; his niece, Casey Bolger; his brother, William “Roger” Sparks, and his mother, Annie Sparks.

After growing up in Virginia with four siblings, Allen took a chance in moving to Englewood, Florida. In 1988, Allen met Helen “Missie” Fulton who would become his loving wife and mother of his four children. Allen and Missie remained married for over 32 years, until his passing.

Allen was employed in Boca Grande with Boca Bay Master’s Association for 22 years, the bulk of his career as a landscape foreman.

Allen was a dedicated husband, father, grandfather, brother, and friend, who provided much love to his family and friends. Allen believed family meant everything and would often spend time instilling this belief into his children. Allen lived a life that gained the respect of his family and many others. Allen was a devout fan of the Washington Redskins, a classic car and classic rock enthusiast, and could be found at the bowling alley volunteering with the Charlotte County Special Olympics. In his spare time, Allen found joy being surrounded by his family and selflessly providing for others.

Allen was loved, respected, and adored and will be missed greatly!

A Celebration of Life is scheduled for noon on Saturday, Feb. 6 at Lemon Bay Funeral Home, located at 2 Buchan’s Landing in Englewood. Light refreshments to be offered at Indian Mound Park immediately after the service. Flowers, cards, and condolences may be offered at the funeral home under the Sparks’ name.

Allen Sparks, died from a rare blood disease called Amyloidosis. Allen worked up to the time he was hospitalized, on January 5. The disease was confirmed one week ago, indicating heart and kidney involvement. He was scheduled to seek treatment at the University of Miami in three weeks.

Allen was a family man and gentle soul. He and his wife, Missie, raised their three children and since then adopted a special needs child who will require continuing care. Donations are being sought from the community and fellow employees to assist Missie for the challenging times she has ahead of her.

On their behalf we will be collecting donations for the family. For those interested, please make your check payable to Boca Bay Master Association, Inc. noting “for the Sparks Family” in the memo and drop off/mail to the Associations Office.