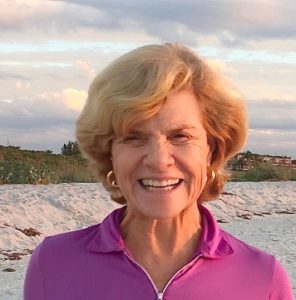 Katherine “Cassie” Sheffield Kernan, 74, a mother, dancer and socialite, died in a car accident in Boca Grande on December 18, 2018.

Cassie was a camp consultant, world traveler, tennis player, movement therapist, competitive golfer, fitness advocate, actor and bridge player. She was a super connector who forged lifelong friendships with people in multiple locations and from all walks of life.

Cassie was a lifelong student of dance. She immersed herself in learning and then shared through her teaching a wide array of styles ranging from Middle Eastern belly dancing to tap. Known for joyfully bursting into dance at gatherings of friends and family, in 1973 Cassie was featured in Life Magazine when she performed a belly dance demonstration at the United Nations.

With her signature infectious smile and boundless energy, Cassie served her communities in many ways. She volunteered as a movement therapist at the Bedford Hills Correctional Facility for Women, where she helped women who were recovering from abuse, and she was a long-serving board member of the Boca Grande Community Center. Hundreds of families benefited from her expertise as a professional consultant to kids who were looking for camps, community service and summer adventures. As a lifetime fitness advocate, Cassie taught Jazzercise classes for over a decade and continued to attend dance classes locally and wherever she traveled, making friends everywhere she went.

Cassie started visiting Boca Grande in the late 1960’s with her husband Frank Kernan. Cassie and Frank became homeowners in the early 1990’s. She was an active member of the Boca Grande Women’s Club, The Planters Garden Club and various wildlife preservation efforts on the island. She was an enthusiastic promoter and a Director of the Friends of Boca Grande Community Center. Cassie appeared in many performances of the Royal Palm Players, often as one of the “Tappers” dance squad. Cassie did not waste a lot of time resting. When not playing duplicate bridge or tennis, she was often found golfing at the Lemon Bay Golf Club or on the Gasparilla Inn course, where she was the 2017 ladies club champion. Friends saw her frequently walking the island with her beloved dog Charlie.

Born in Locust Valley, NY in 1944 to Polly Potter Sheffield and Joseph Earl Sheffield,  she spent most of her early life in Camden, South Carolina, where she attended Calvert School and later Miss Hall’s school in Pittsfield, Massachusetts. She attended Finch College and Columbia University. In 1968 she was married to Frank Kernan until his death in 2015. During their marriage they raised three children, Josh of Mill Valley, California, Michael of Weare, New Hampshire and Kate of Glen Cove, New York. She was a beloved and devoted grandmother to eight grandchildren and a sister to the late state senator Penny Baldwin Williams of Tulsa, Oklahoma and to Helen Baldwin Bonsal of Glyndon, Maryland.

An 8 a.m. Memorial Mass for Cassie will be held by Father Carosella at Our Lady Of Mercy Church, 240 Park Avenue, Boca Grande on Friday, Jan. 4. Cassie’s sons Josh and Michael Kernan, as well as her daughter, Kate Doerge, are hosting an event for her close friends and family on Saturday, Jan. 5 at 5:30 p.m. at the Gasparilla Inn Beach Club.

In lieu of flowers, contributions may be made to the Boca Grande Health Clinic and Our Lady of Mercy Parish.