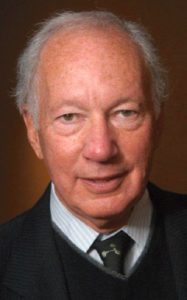 Boca Grande resident and fashion industry mogul Bud Konheim died on Saturday, April 13, 2019 from injuries he sustained in a bicycle accident in Connecticut. He was 84. Konheim was the chief executive officer of Nicole Miller Inc., and he worked with Ms. Miller for more than 40 years. You can read more about that on the Women’s Wear Daily web site (wwd.com) or at fashionweekdaily.com. For us, here on the island, Bud was a funny, loveable man who was always smiling and had many friends. He and his wife, Colleen, found Boca Grande about two decades ago, and stayed because of a bronze, winged pig (Colleen collects them, and when they saw this pig in the little cottage on Lee Street where they first lived, they knew it was a sign). Bud’s official obituary is pending. He is already missed by many.