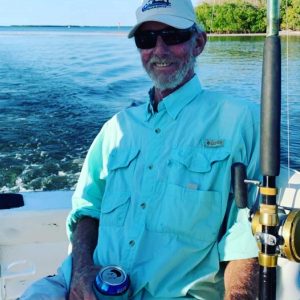 William Townsend, a man known for his abundance of love, smiles and mirth making, left this earth on Thursday, Oct. 29, 2020 surrounded by his family at his home … and he made this realm a little less jovial and a whole lot lonelier when he left.

Known as “Bill” or “Willy” to his friends and family, he was born on July 2, 1949 in Grand Rapids, Mich. to parents Richard D. Townsend and Bonnie Margie Sexton Townsend. The family moved to Punta Gorda in 1956, and William graduated from Charlotte High School, Tarpon Class of 1968.

He enrolled in the United States Army after high school and was discharged in 1971. When he got out of the military, he moved out west, to Colorado, for a few years. His heart was still on the Gulf Coast of Florida, though, and he moved back home a few years later. That was when he met his wife, Cynthia Lynn (Voris) Townsend.

His work as a carpenter was well known in Boca Grande, the town where he worked for more than 50 years.

William was a free-spirited icon in Charlotte County back in the day, known as a prankster with a cocktail in one hand, usually wearing an unbuttoned sport shirt. Many fond memories were made with Bill in the 1960s, some in Port Charlotte and many on Englewood Beach, back when it still sported a dirt road and all the people who played in the surf were locals.

As he got older Bill spent his days fishing, golfing, sailing and boating with his family. He loved the water and the wildlife of Florida, and usually celebrated it with a beer in his hand.

He will always be remembered for his kind and constant smile, his friendliness, his willingness to help others, and for being the best dad, the best husband, the best worker, and the best life of the party.

He leaves behind his wife, Cynthia; his son, Brandon, Brandon’s wife, Kelsey, and their son, Braden; his daughter, Willy and her boyfriend, John Copper; his nieces and nephew, Jade, Jena and Grant; his brothers, Bobby, Barry and Rick; and his granddogs, Jake and Ralph.

A tribute To William’s life will be held on Thursday, Nov. 19 at the Crowninshield Community House in Boca Grande (130 Banyan Street) from 11 a.m. to 3 p.m. Feel free to join his family and friends to celebrate a life well lived.