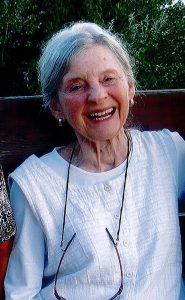 She was preceded in death by her parents, Arthur and Anne Ellacott, her sister, Joan O’Bryant, and her grandson, Kyle Killworth. Barbara was born in Oak Park, Illinois in 1931. She shared the first two weeks of her life in the maternity ward at West Suburban Hospital with her future husband who was born two days after her.

George and Barbara were reunited on a blind date in Ann Arbor while attending the University of Michigan and married in 1954. She was a member of the Alpha Xi Delta sorority. Barbara earned her degree in education and served as a counselor at the Grand Rapids Child Guidance Center.

She was a gourmet cook, and avid reader, and a devoted friend to many. Contributions in her memory may be made to the Benzie Shores District Library, 630 Main St., Frankfort, MI 49635.

A memorial service for Barbara is planned to be held this summer in Frankfort, Michigan.