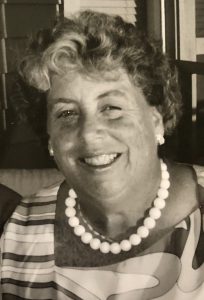 Anne Wood Birgbauer, a resident of Grosse Pointe Farms, Michigan, passed away on October 25, 2018. She was born in Detroit on March 14, 1944. She graduated from Grosse Pointe University School and Connecticut College.

Mrs. Birgbauer met the love of her life, Bruce D. Birgbauer, at Grosse Pointe University School, and they lived in Cambridge, Mass. as newlyweds before returning to Michigan. She was always outgoing and cheerful and would greet friends and family with a big smile and hug every time they saw her. She had a deep love for family and cherished time spent with her children, grandchildren and extended family. Mrs. Birgbauer was known for spontaneous acts of giving, including mystery trips, buying lunch for the person in line behind her, walking in the Thanksgiving Day parade and organizing appreciation events for the Detroit Police Department.

Mrs. Birgbauer was an avid bridge player who became a Life Master. She was also a competitive tennis and field hockey player, as well as a tennis coach. She also worked as an outreach coordinator for the Episcopal Diocese of