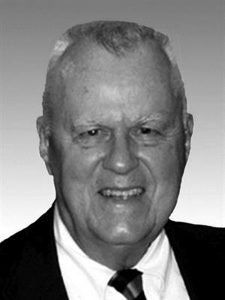 Roddey Dowd, Sr. passed away at home September 30 with his loving family by his side. He was born in Charlotte on July 18, 1932, the son of the late W. Frank Dowd and Elizabeth Roddey Dowd.

Roddey graduated from Woodberry Forest School in Orange, Va. and the University of North Carolina at Chapel Hill, where he met his beloved wife Elizabeth “Pepper” Stetson. They were married in West Chester, Pa. in 1953. He began his military career as a freshman in college by enlisting in the North Carolina Army National Guard. A year after graduation he served on active duty from 1955 to 1957. In 1965 he re-entered the Army, earning his paratrooper wings and a coveted Green Beret. Roddey proudly served as the executive officer of Operational Detachment A-14, Company B 20th Special Forces Group (Airborne) 1st Special Forces, North Carolina National Guard. It was with this “Band of Brothers” that he formed close, lifelong bonds, retiring as Captain in 1968.

Following his discharge, Roddey continued his allegiance to the Army. In 2013 The Department of the Army awarded Roddey the Outstanding Civilian Service Medal for his “over five decades of unwavering dedication to the Army through a range of independent and unique initiatives, from his fundraising efforts for the Airborne and Special Operations Museum in Fayetteville, N.C., his careful stewardship of the development of the Vietnam Veterans Memorial in Mecklenburg County and his letter- writing campaign to the North Vietnamese government to release information on prisoners of war.” Expanding on the “Write Hanoi” campaign, Roddey in 1970 chaired the campaign’s Citizens’ Committee for Mecklenburg and surrounding counties, culminating with the hand delivery of over 400,000 letters to the North Vietnamese embassy in Paris. Another recognition came his way when the Carolinas Freedom Foundation presented Roddey with its Freedom Award for his patriotism, humanitarianism and philanthropy.

In 1954, Roddey began his career at Charlotte Pipe and Foundry Company, a family-owned firm begun by his grandfather in 1901. During his 64 years with the company, he had the pleasure of serving with his father, brother, son, nephew and close friend and associate, Ned Hardison. He held numerous executive positions in the company. Roddey was devoted first and foremost to the health and safety of the company’s employees, proud to offer them secure jobs. He often wondered “where do we find such wonderful people?”

Roddey had a quiet and unassuming manner. He brought his business acumen, leadership qualities and sense of fair play to bear on numerous business, educational, community and cultural endeavors. He was past director of First Union National Bank (Wells Fargo), the Ruddick Corporation, North Carolina National Bank – City Board – (Bank of America), W. R. Bonsal Company and Norfolk-Southern Railroad Advisory Board, Norfolk, Va. He served on the Board of Visitors of the University of North Carolina at Charlotte, was a member of the Central Selection Committee for the Morehead-Cain Foundation at UNC-CH and the Board of Visitors at Winthrop College. Roddey was a director of the Citadel Development Foundation of Charleston, S.C., which in appreciation of his many years of service made him an honorary graduate. He was a director of the Dowd Branch of the YMCA, director of the Foundation for the Carolinas, president and director of the Charlotte Speech and Hearing Center and a Trustee of the North Carolina Baptist Hospitals, Inc. He was a founding director of the North Carolina Outward Bound School, which made him a lifetime director for his many years of exemplary service. He also was president of the board of trustees of the Mint Museum of Art.

Roddey served on the Airport Advisory Committee for Charlotte Douglas International Airport, helping lay the groundwork for the nation’s fifth- busiest airport. A charter member of Myers Park Baptist Church and son of church founders, Roddey proudly served on their board of deacons.

In his spare time, this exceptional gentleman was a keen outdoorsman with a great love of duck hunting and other shooting sports. Roddey was a man of remarkable curiosity who took courses in automotive mechanics at CPCC, jewelry making at UNCC and French cooking lessons. He was a voracious reader with a focus on military history and Southern culture. He enjoyed music and was an avid lover of animals. It gave him great pleasure to mentor young people who sought his advice. Roddey especially loved time spent with family and good friends.

The family would like to recognize the wonderful care Roddey received from his dedicated team of doctors and caregivers; Loretta Cooley, Jill Dambrosio and Gloria Reeves, who helped him live his last years with grace and dignity; and to Hospice, who added their unique skills of care during his final days of life.

Condolences may be offered at       harryandbryantfuneralhome.com.