Lawrence Askew Warner of Boca Grande passed away on March 5, 2017. 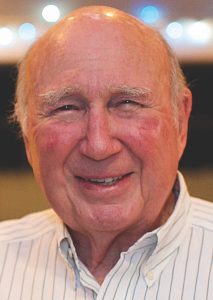 Larry Warner was born on September 30, 1933, the first of three sons born to Mabel Askew and Lawrence Glover Warner in Vicksburg, Mississippi.

Larry spent his childhood in Vicksburg and his summers in Sandy Hook, Connecticut with his grandmother and extended family. Larry graduated from Woodberry Forest School in Virginia in 1952, where he was a prefect and lettered in wrestling and football.

Larry loved Woodberry. He taught there briefly following college and maintained Woodberry friendships throughout his life. Larry graduated from the University of Virginia in 1956, where he was a member of St. Anthony Hall (Delta Psi) and “Grand Banana” of the Eli Banana Ribbon Society.

Larry graduated from the University of Virginia Law School in 1959.

He married Mary Stoll of Louisville, KY. with whom he had three daughters: Stuart, Ann and Polly. That marriage ended in divorce.

In 1974, Larry married Cappy Wales, of Bronxville, NY. and became a father to Cappy’s sons: Whit, Bob and Sid Wales. Larry began his career at Citizens Fidelity Bank and Trust Company of Louisville, before joining First Kentucky Trust Company, where he became president.

Larry was active in the community, serving on the Boards of the Louisville Zoo, St. Francis School in Goshen, The Louisville Country Club, The River Valley Club, The Louisville Free Public Library, Actors’ Theatre of Louisville and Planned Parenthood. Larry loved golf and paddle tennis. He liked lunchtime backgammon games at the Wynn Stay Club.

Larry was an extraordinary cook. He and Cappy enjoyed spending their summers in Little Compton, Rhode Island and Stowe, Vermont. And, wherever he was, whenever there was music, Larry loved to dance. Following his retirement from First Kentucky Trust, Larry and Cappy became residents of Boca Grande, Florida.

Larry continued to enjoy golf and rediscovered his passion for bridge.

He was a member of St. Andrew’s Episcopal Church, where Cappy served as Assistant Rector. He was also a member of GICIA and other local organizations. Larry is survived by Cappy, his younger brother, Chick Warner, all six of his children as well as twelve grandchildren and three great-grandchildren.

First and foremost, Larry will be remembered for his buoyant energy and jovial nature, his love and appreciation of good conversation with family and friends. A service for Larry will held at St. Andrews Episcopal Church in Boca Grande on March 18th at 2PM with a reception to follow.