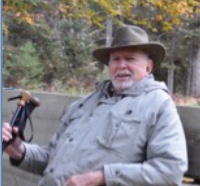 He served during 1944-45 as a civilian seaman with the U. S. Army Transportation Corps (ATS), having enrolled as an ordinary seaman a few days prior to his sixteenth birthday. He held the Merchant Marine Combat Bar for that overseas’ service. In 1953, he was commissioned as a 2nd Lieutenant, Transportation Corps, Army of the United States. In 1962 he was honorably discharged from the Reserves as a 1st Lieutenant, Infantry.

Following his marriage to Elizabeth Kay Faulk in 1973, Gibson became actively engaged in the commercial swordfish industry, working out of New Bedford, Massachusetts. Dana and Kay later operated Jekyll Towing & Marine Services, an ocean tug enterprise based in Brunswick, Georgia, and later St. Petersburg, Florida. In 1985, the Gibsons sold their tug Jekyll Isle (now Pentagoet) to Maine Maritime Academy and relocated to Camden, Maine, where they resided and worked together as maritime historians for 30 years. They became residents of Fort Pierce (North Hutchinson Island), Florida, in 2013 but continue to maintain a summer place in Maine.

During 1988, Mr. Gibson’s pro-bono consulting work resulted in Armed Forces veterans’ status and benefits being awarded by the Department of Defense to over 84,000 civilian seamen who served in the World War II Oceangoing Merchant Marine from December 7, 1941 to August 15, 1945 – the period encompassing that time when merchant ships were armed and the world’s oceans were actively contested by Axis forces. In addition, he authored the qualification brief for the civilian seamen of the Army Transportation Corps of WW II winning veterans’ status for that group as well.

Gibson authored four books and co-authored four others with his wife.  All of their writings deal with aspects of maritime history. Their two volumes which covered the Civil War period received the 1996 John Lyman Award for Naval History. Their last book, “Over Seas,” published in 2002, was selected by the American Library Association as an Outstanding Academic Title.

For his work on behalf of World War II merchant seamen, Gibson was made the recipient of the Captain K. C. Torrens Award from the Council of American Master Mariners; the Distinguished Service Award from the U. S. Merchant Marine Academy at Kings Point; and the Marconi Memorial Gold Medal of Achievement from the Veteran Wireless Operators Association. Together with his wife, Gibson received the K. Jack Bauer Award for contributions made to maritime history. They are the only husband/wife team to be so honored.

His professional affiliations included membership in the Council of American Master Mariners; the Marine Society of the Port of New York; the North American Society for Oceanic History; Steamship Historical Society; Army Historical Foundation; and the Council on America’s Military Past.

Mr. Gibson is survived by his wife, Kay; his daughter Rene Gibson of Hillsdale, NY; his son Bill (April) Gibson of Gloucester, VA; his brother Mark (Robbie) Gibson of Ivy, VA; his sister Diana (Bill) Garner of Bethesda, MD; and his sister-in-law Sara Gibson of Richmond, VA. He was predeceased by his daughters Marion and Abby, his brothers Harry and Langhorne, Jr, and his sisters Parthie Shields and Renee Darrell. Interment of ashes will be in Searsmont, Maine, at the convenience of the Gibson family.