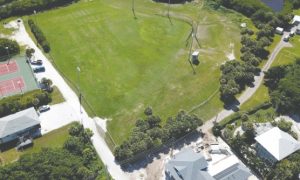 Lee County Parks & Recreation announced last week it will host a public meeting at 2 p.m. on Tuesday, Nov. 5, in the auditorium at the Boca Grande Community Center, regarding a proposed dog park coming to Boca Grande. The park is being considered for the Wheeler Road ball field location.

According to Tim Engstrom, a Lee County public information officer, the park will be built during Lee County’s fiscal year 2019-20, which begins Oct. 1.

Originally the plan was to have the park done prior to the end of the year, but concerns from neighbors spurred the public hearing. Now, the fate of the dog park is up in the air.

If the park is created, Engstrom said the quarter-acre site would mirror other dog parks Lee County manages. The park would include landscaping, a fenced yard for large dogs, a separate fenced yard for small dogs, a drinking water station and a dog wash area.

Engstrom also said the ball field would stay on the property, and that the farmer’s market would not be affected by the dog park.

When Engstrom was asked why the park couldn’t be a bit bigger – as the county-owned property at the end of Wheeler Road is approximately five acres – he said the small dog portion of the park would be .24 of an acre, while the big dog area would be .48 of an acre.

Engstrom said that various community members requested a dog park on the island due to the closure of the unofficial dog park on 7th Street because of The Gasparilla Inn & Club expansion project.

“Residents near the proposed park asked for the meeting. Lee County staff will be on hand with information and will take questions from the public,” he said.

When county representatives were asked to provide an illustration or rendering of the proposed dog park in correlation to the rest of the property, we were told that none exists right now. They will, however, have them ready for the November meeting.

To learn more about other area dog parks, go to leegov.com/parks/dog-parks.

Newer PostFishing this weekend, clean-up next Saturday
Older PostA good deed done for the island by our iguana trapper