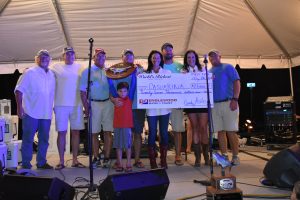 On a day when many thought no fish would be caught, nine releases were recorded for the 2017 World’s Richest Tarpon Tournament, held on Friday, My 26 from 2:30 to 7:30 p.m. in Boca Grande Pass.

Fishing was cut down from two days to one due to predicted rough weather in the Pass for Thursday.

That announcement was made at the captain’s party, held at the Gasparilla Inn Beach Club, on Wednesday night.

As past policy suggested, tournament directors decided to fish on Friday only but added an hour to the tournament.

This win was particularly important for Wayne.

Though he has won the World’s Richest in the past – in 2001 – he did not get the Boca Grande Fishing Guides Association Jay Joiner Memorial Belt Buckle.

The award is in memory of his second cousin, Jay Joiner, who was one of the most winning captains in the Pass until he died in a car accident.

At the awards presentation downtown after the tournament Cappy Joiner, president of the BGFGA, said,

“What Wayne has done today is to have won the most coveted prize in all of Boca Grande.”

It was apparent that Wayne thought so, too.

Fishing started slow for the first hour of the tournament, but the action picked up in fits and starts for until the last hour.

The key words of the day were tiny tarpon, as the majority of the fish caught weighed between 20 and 60 pounds … small enough not to know better, but big enough to count.

Casuarina hooked up at 3:26 p.m. and released in the same minute for the first fish of the day, with Faithfull II (Capt. Matt Coleman and the Woodruffe crew) following right behind with a release at 3:5 p.m.

Faithfull II got their second release at 5:05 p.m., then Searene with Capt. Lamar Joiner Jr. popped up with a release at 5:27 p.m.

SweetWater also had a single release in the tournament at 5:45 p.m.

Fishing slowed down again until just after 7 p.m., when the Spook team with Capt. Nat Italiano got the last fish of the tournament at 7:09 p.m.

At first everyone thought Casuarina was going to get the last fish as well as the first fish (an almost-replay of last year) when they had a bite at 7:13 p.m., but it turned out to be a very exuberant stingray instead.

The average release time for the tournament was one minute, which shows how beneficial catching little tarpon can be.

One captain pulled the line for the release on his tiny tarpon, and the force of it pulled the fish in the boat for a second. Luckily it was small enough to be thrown back with two hands and little effort, and the fish was counted because the official release was called in before fish and boat made contact.

Wayne not only took home the coveted belt buckle, trophy, ring, Yeti cooler and much more, the big prize of the night was an AR15 semi-automatic rifle, specially engraved for the World’s Richest Tarpon Tournament and donated by Ram-Lin Trailers.

The Casuarina team, led by Coleman and Team Leader Howard Wise, took home a check for $26,600.