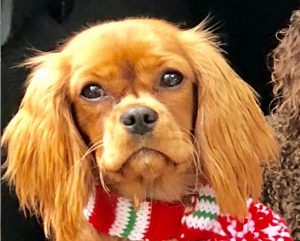 This makes Black Jack a Cavapoo! The dog world is going “poo-doodle crazy” – we have golden doodles, Shih-poos, Maltipoo and Cockapoo, to name a few. That is why there is a new “Poo-doodle” breed class for this year’s Boca Grande Dog Show.

Toodle over to the Dog Show, where Black Jack’s mom Lizzie will be taking to the runway with dashing papa Louie at her side at 10 a.m. on March 16 at the famous Boca Grande Women’s Club Dog Show at the Boca Grande Community Center. The only place to see and be seen. We’ll have oodles of fun!

Newer PostHave you hugged a Methodist today? Now is the time, pancake breakfasts are back
Older PostDo you have your ‘Call of the Islands’ Green Gala tickets yet?