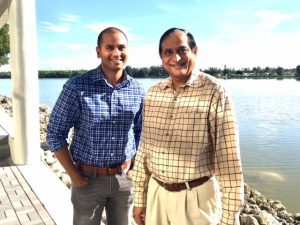 Aashish Patel and his father, George Patel, own the Boca Grande Resort on the north end of the island. The hoteliers recently purchased The Palmetto Inn on the island.

Although The Palmetto Inn now has new proprietors, patrons can expect it to remain the same cozy, family-style inn that has existed on the island for decades.

Aashish Patel and his father, George Patel, own the Boca Grande Resort on the north end of the island. The hoteliers recently purchased The Palmetto Inn to offer another kind of accommodation for island visitors.

“It’s a comfortable place to stay, and it’s a short walk to the beach,” Aashish said. “The first floor has a large kitchen and a covered patio, so it’s perfect for families.”

The Patels first visited The Palmetto Inn in 2005.

“I stopped in to talk to the owners, and I thought it was so charming,” Aashish said. “There aren’t too many places on the island that offer nightly accommodations, so it seemed like a great investment property.”

Aashish said that for years he and his father have been looking into purchasing property on the island. They acquired the Boca Grande Resort during the summer of 2016.

They’d been looking in the historical district closer to the beaches and realized that if they purchased an existing commercial property, it would be much easier than trying to construct something new.

“We can now market two kinds of rental properties on our website – one with more of a resort atmosphere and another that offers convenient efficiencies closer to the beach,” Aashish said.

George Patel immigrated from India to San Francisco in 1969, and he helped a friend run rental properties on the West Coast.

“My dad has always been interested in learning how to maximize the potential of rental properties,” he said.

The new owners said they plan to keep The Palmetto Inn just as it is, planning only a few minor repairs.

“Bev and Len have kept the place in very good condition, so we’ll be able to accommodate guests right away,” Aashish said. “We don’t want to change anything about it – we just plan to update it and renovate it a little bit.”

Looking ahead, guests will be able to pick up their keys at the Boca Grande Resort at 5800 Gasparilla Road and then check into their rooms at the inn at their leisure.

The Patels are currently considering who will be managing The Palmetto Inn rental office this upcoming season.

Until then, guests can make reservations via the Boca Grande Resort by calling 964-4443.

There are currently six units available at The Palmetto Inn.

Newer PostToday is your last day to vote for the Fust Library!
Older PostMatthew Reas gets 10 years for death of Dylan Gonzalez