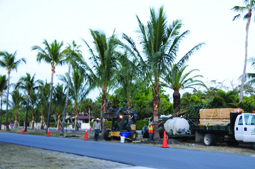 The planting of new palm trees on the Gilchrist Avenue median solidifies the fact that Lee County is done discussing the parking controversy that has surrounded that island thoroughfare for almost two decades.

It began on Tuesday, and it is still going in earnest as of press time.

According to Lee County Communications Director Betsy Clayton, the contractor is on track to finish sometime next week, which is far ahead of their intended schedule.

After the parking decision was made by Lee County in late October, Assistant County Manager Douglas L. Meurer had said the project would cost less than $100,000, and that it was scheduled to be completed by the end of the year.