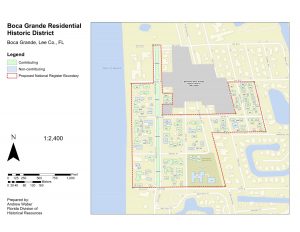 BY MARCY SHORTUSE- An interesting matter has arisen in the case of the nomination of portions of the residential historic district of Boca Grande to the National Historic Register, and it even has Lee County’s attorneys scratching their heads in puzzlement.

The most recent revision of the nomination that was turned into the Department of the Interior in Tallahassee shows Gilchrist Avenue no longer listed as “not applicable,” colored with a “non-contributing” color and listed as nothing more than a “public space” or “plaza,” but now shows it in green … a color change that means the nominator’s intention is to have it found as contributing. This new change flies in the face of everything that has recently been purported about the Gilchrist median strip’s part in the NHR nomination.

Originally Mikki Hartig, the creator and filer of the nomination, said Gilchrist Avenue had nothing to do with the nomination. Others from her camp backed that opinion, saying the nomination to the National Historic Register was nothing more than a “prestigious honor” for any part of the proposed area. But with new revisions of the nomination now on the desk of authorities in Tallahassee, even Lee County’s attorney’s are questioning the true motives of those who instigated the process.

Assistant Lee County Attorney Amanda Swindle sent out an email to county commissioners on Wednesday, Oct. 21 just before 5 p.m. that read, “The county has received a revised nomination from the Division of Historic Resources, which now clearly includes “Gilchrist Avenue median” as a nominated historic place (see page 13 of 46 in the first attached document).  We have been given 60 days to respond. The nomination is scheduled for a public hearing before the Boca Grande Historic Preservation Board on November 10, 2020. Under the Certified Local Government Guidelines, if both the historic board and the county’s chief local elected official recommend that a property not be nominated to the National Register, the state will take no further action. However, if the nomination is supported by the historic board or the chief local elected official, the nomination will be considered by the Florida National Register Review Board at a virtual meeting on February 4, 2021.

“I will be working with DCD staff to determine the implications of this nomination and will report those findings to the group prior to the item being scheduled for consideration by the Board of County Commissioners in advance of the state’s 60-day deadline.”

There are potential issues that would go along with the appointment of a public roadway or median to the National Historic Register, not withstanding the fact that it might be more difficult to perform roadwork and landscaping, and that certain weight limitations could be imposed.

As we have mentioned in previous articles, there is no sound proof that any plantings that historic landscape architect Carl Rust Parker planned for Gilchrist ever came to fruition, much less survived more than a few years if his plan was implemented. We do know that for more than 100 years island residents have maintained the landscaping on the median strip, until Lee County took the duties over.

Despite that, in Section 7, page 2 of Hartig’s nomination it states, “ …While plantings have been replaced over time, the avenue reflects the original design intent of landscape architect Carl Rust Parker.”

In an email sent on September 5, 2013 Mary Gibbs, who was then the director of the department of community development for Lee County, asked Lee County Counsel John Fredyma if the Boca Grande Historic Preservation Board could designate Gilchrist Avenue as an historic resource, pursuant to Lee County’s Land Development Code Chapter 22. Fredyma’s short answer was no, the BGHPB did not have the requisite legal authority to designate Gilchrist Avenue as an historic resource.

The legal basis for his answer was the fact that the LDC Chapter 22 does not support the authority of the BGHPB to designate a public roadway as an “historic resource.”

According to Chapter 22 of the Lee County Land Development Code, a public roadway rarely, if ever, meets the standards to become an historic resource. Fredyma told Gibbs in that missive that the while Gilchrist Avenue was in an historic district, a road or street was not the type of property that could be considered as an “historic resource.”

Fredyma also said that such a nomination would hinder the county’s ability to remain “unfettered in its ability to maintain and operate a public road in a manner that advances public safety for both vehicles and pedestrians,” and that, overall, such a designation would be an “inappropriate delegation of authority.”

So why would such a plainly-made case for such a public roadway not to be made an historic resource be ignored?

That answer remains to be seen. What we do know is that in the original application for the NHR, Hartig listed Gilchrist Avenue as “N/A.” In information received from the Lee County Attorney’s Office early this morning, though, that is no longer true.

We expect to hear the results from Swindle’s findings soon, and we will keep you posted. In the mean time, the next Boca Grande Historic Preservation Board meeting is scheduled for Tuesday, Nov. 10 at 10 a.m. in the Boca Grande Community Center Auditorium. This matter will be presented to the public, and to the BGHPB, at that time.