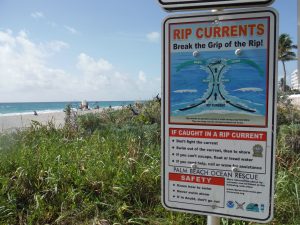 The time has come to start a new discussion on more specific signage at our southern beach access points. The two stories on the front page should testify to that, even if you’re not a huge fan of more signs.

Small tourist destinations don’t normally tout their drawbacks, and I understand that, but this isn’t a new problem. We are almost at an average of a drowning per year, with no process in the works that I’m aware of to change that statistic. Rough figures from the Boca Grande Fire Department since 2001 show 18 drownings in their response area.

If you ask a local person with children where their kids go swimming, they will tell you that anywhere north of 1st Street is all right. Anything south of 1st Street, including Range Light Beach, can be dangerous. Last year we lost Xavier Castro right around Father’s Day at that beach, and the farther south you go, the more risky swimming can be.

Dangerous rip currents can develop as the tide comes in and out and weather systems are developing in and near the Gulf, and swimmers need to realize that. Just because they had a great time swimming on Monday morning, July 10 at Sea Grape Beach doesn’t mean there won’t be a rip current at that same spot on Friday, July 14. With just a little pursuit of knowledge and a cell phone, people can make themselves aware of tidal fluctuations and weather systems by putting a tide application on their phone. You can also sign up for rip current warnings through NOAA and FEMA with their phone applications.

But smart phones can’t take the place of planning and being aware that it is dangerous to swim here at the south end of the island. That’s really all you need to know. Your child can be playing in waist-deep water while wearing a life vest, take a step or two out too far and be gone in just a few seconds.

If you still don’t believe it could happen to you, I will confess my own ignorance. When my family and I started coming here in the late 1970s, we used to swim down at the very south end all the time. We were snorkeling down by the rock jetty during a tarpon tournament one time, I do remember that. The strong currents down by the old L dock were a challenge for me, and I would walk against them until I got to the old concrete structure, then would let the current carry me back again … but I never felt like I couldn’t swim out of them.

In speaking with Theresa Wise, the woman in our front page story who helped save the two people last week, she mirrored my thoughts in her words. Since she used to be a lifeguard, she thought she was prepared to help the people in trouble, and even she was shocked by the ferocity of the current. I have since rethought my position on swimming down there.

This brings me back to signs. What do we need to say on these signs? How can we say it succinctly enough so that people will understand they need to be diligent each and every time they decide to swim there? Can we post them at each dune crossover and beach access south of 1st Street?

While we try to figure this out, as locals we need to make sure visitors here are aware of the potential danger. The other day I saw two women and a little girl making their way down the beach by Belcher Road, and the little girl had her flamingo inner tube with her. I stopped and asked if they were familiar with the island and the strong current potential at the south end of the island, and they said they were … but they continued walking to the beach.

All we can do is tell them.